The Liberty Medal, made by Hamilton Jewelers 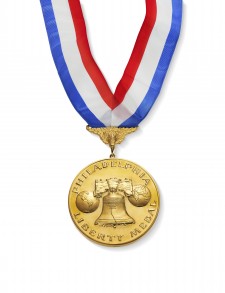 The Liberty Medal is awarded annually by the National Constitution Center to recognize men and women of courage and conviction who have strived to secure the blessings of liberty to people around the globe.

The award will be presented at the 30th Annual Liberty Medal Ceremony on November 11, 2018, at the National Constitution Center in Philadelphia. Handcrafted by Hamilton Jewelers, the medal is a tremendous acknowledgment of individuals who display exemplary humanitarian efforts.

Past recent recipients include:

“We are honored to craft this piece of American History to acknowledge these dedicated individuals,” says Hank Siegel, president of Hamilton Jewelers.