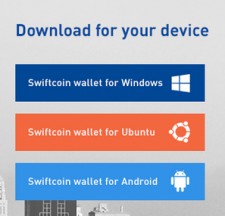 Menlo Park,CA, May 2, 2016 (Newswire.com) -  JohnMcAfeeSwiftMail.com is offering $30,000 to any hacker who can break SwiftCoin and the John McAfee SwiftCoin and SwiftMail code.  The offer expires May 30.

In spite of numerous attempts, no hacker was able to win the $20,000 prize offered last month.

At John McAfee's request, Team Daniel Bruno created John McAfee SwiftMail on Android in 2015. It uses the same block chain technology made famous by bitcoin, to remit mail and attachments as well as payments.

The hacker should identify himself to JohnMcAfeeSwiftMail.com, execute the attack against SwiftCoin, reveal the contents of SwiftMail and/or steal SwiftCoin then show how it was done.  Third party observers will be provided free SwiftCoin wallets to be hacked into and report the results.  Volunteers and journalists are encouraged to participate.  Their sole public identification during the challenge will be a SwiftCoin wallet e.g. 471a6e4da7b27482d4c428a6c7dcbfce.

At John McAfee's request, Team Daniel Bruno created John McAfee SwiftMail on Android in 2015. It uses the same block chain technology made famous by bitcoin, to remit mail and attachments as well as payments.

In February, presidential candidate John McAfee promised to eat his shoe on live television if he couldn't hack the San Bernardino iPhone in three weeks:

"I work with a team of the best hackers on the planet. These hackers attend DEF CON in Las Vegas, and they are legends in their local hacking groups, such as HackMiami. They are all prodigies, with talents that defy normal human comprehension… I would eat my shoe on the Neil Cavuto show if we could not break the encryption on the San Bernardino phone..."

Solidus Bonds have maturities of 30 days to ten years and pay the coupon in digital currency to the holder of the bond. All coupons are paid every 30 days until bond redemption in peer-to-peer digital currency. Interest payments and bond redemption are executed by algorithm without human intervention, making default impossible. Duration is reduced.  www.SolidusBond.com

The SwiftCoin.Club Affordable Franchise Opportunity
With a SwiftCoin Teller franchise, the www.SwiftCoin.club network serves the local community by replacing banks and money transfer centers. Substitute digital currency for wire transfers and convert any digital currency, including bitcoin, into local paper money. Buy a franchise for less than 10K.
Team Daniel Bruno - May 2, 2016