The Homeless in Florida Defy All Odds

It has been a long and rugged road, but the homeless proved that they could help each other since 2008. They have helped pioneer many new methods that are working.The numbers in rural America continue to increase.The Mission in Citrus has helped lead the way in innovative projects that work to reduce the numbers.They have just reached a 73% employment rate , which is unheard of for shelters in the US. After deducting children in the women's house, the rate is 90%. They have reason to be proud. 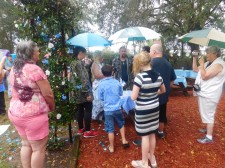 Crystal River, Florida, May 25, 2016 (Newswire.com) - ​Many said that it could not be done, but they have shown that it could be done, when given the proper resources. They have come a long way in the past eight years, from over 60 tents to the three shelters that are operated today. Including a Veteran's shelter that opened in 2010. There were no high paid staff or administration expenses, other than the office supplies, leases, and other bills that were needed to operate. They have received awards from Great Nonprofits, the Guide Star Seal for transparency and many others over the past three years, and have more positive reviews than many other charities around the United States.

Thousands have been helped by learning to stretch a dime into a dollar. The foundation for the Mission in Citrus and the rules and regulations that they still follow, were set up by their homeless founder and six other homeless people. It has been a long struggle, but their faith in God helped them to make it through many tough times. While they live by faith, no one is forced to pray or go to church. Most of them do on their own. Veteran's fought for that right.The Mission in Citrus Inc. was founded in 2008, after their founder became homeless himself, and found that traditional shelters were not working, or addressing the needs of Veterans.Veterans fought for the rights of all, including themselves. The Founder felt that no one should lose those rights by becoming homeless.

The Homeless are helping each other when given the proper resources.

They have been pioneers since the start, and have shown that most of the homeless Veteran's problem can be greatly reduced. Thanks to a state grant, they now have three paid staff. But there is far more to be done. They are only limited by funding. Grants are used for specific projects and cannot be used towards operational costs. The huge increase in homeless Veterans has strained their resources. They are hoping Congress will quickly act as many are disabled and in need of additional help. While they are trying to help more Veterans, they forget about the shelters that keep them off the streets and keep them safe.

The Mission in Citrus has a very high success rate, due to offering a hand up and not a handout. And who better to help the homeless, then those who been there and have the knowledge to help others succeed. There have been many imitators, but the Mission in Citrus is the real deal...

The Mission in Citrus is pushing on harder to reduce homelessness.They would like to thank all that have made it possible.

About Mission in Citrus Inc

The most unique and successful homeless shelters in the world.

Will Florida Govenor Scott Do More to Help Florida Veterans When HUD and the VA Made Serious Cuts in Funding
The Mission in Citrus has been helping Veterans since 2008. They were rewarded by having all their Government funding slashed. After the Mission In Citrus reached it's eight year anniversary of helping homeless Veterans,by celebrating a 96% success rate. They are reaching out to get public support in order to keep putting Veterans into homes.
Mission in Citrus Inc - Dec 7, 2016

The Mission in Citrus Veteran's Shelter Accomplishes a 96% Success Rate by Going Outside the Box
The Mission In Citrus reaches it's eight year anniversary of helping homeless Veterans,by celebrating a 96% success rate.
Mission in Citrus Inc - Sep 29, 2016

Rural Homeless Veteran Numbers Are Increasing at a Very High Rate; Obama Needs to Act Now
The Mission in Citrus Operates a homeless Veteran's shelter in Inverness Florida where it is over capacity.The overflow have been placed in their Crystal River shelters due to the heavy increase. New promises have been made by the VA that can not be kept. They base the decrease on Veteran's homelessness on the 2015 Point In Time Count around the US. Same as our census. It will never be correct. Most of the statistics came from Veterans who walk in for services. Not from the woods or other areas.
Mission in Citrus Inc - May 25, 2016