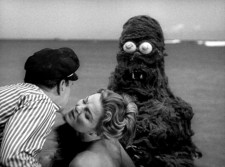 The Film Detective will also celebrate Golden Age icons throughout the month of June, including a tribute to fan-favorite Sherlock Holmes star Basil Rathbone on what would have been his 130th birthday on June 13. Western Hopalong Cassidy actor William Boyd and Moe Howard of The Three Stooges and will also be featured in marathons on June 5 and June 19.

Classic Films for Kids, starring Jennifer Churchill and her sidekick Weston, will be featured every Saturday at 11 a.m. ET on The Film Detective channel. Hosts Jennifer and Weston present entertaining and engaging commentary for classic film fans of all ages, accompanied by family-friendly classics like Abbott and Costello's Jack and the Beanstalk (1952) and Bonita Granville's Nancy Drew Reporter (1939). Churchill and The Film Detective are also set to announce collaborations on a "director's cut" edition of Churchill's popular children's book, Movies Are Magic: The Director's Cut.

For more information about Movies Are Magic: The Director's Cut, visit https://www.amazon.com/Movies-Are-Magic-Directors-Cut/dp/B09Y5DQPPK

For more information on The Film Detective, visit www.thefilmdetective.com.

The Film Detective is a leading distributor of restored classic programming, including feature films, television, foreign imports, and documentaries and is a division of Cinedigm. Launched in 2014, The Film Detective has distributed its extensive library of 3,000+ hours of film on DVD and Blu-ray and through leading platforms including TCM, NBC, EPIX, Amazon, PBS, and more. The Film Detective has released its classic movie app on web, Android, iOS, Roku, Amazon Fire TV, and Apple TV and is available live with a 24/7 channel on Sling, STIRR, Plex, Local Now, Rakuten TV, and DistroTV. For more information, visit www.thefilmdetective.com.