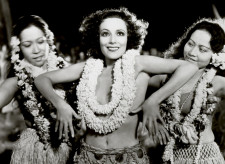 In honor of Asian American Heritage Month, Asian American pioneers in cinema will be honored, including an Anna May Wong mini-marathon, featuring A Study in Scarlet (1933) and Lady from Chungking (1942), and features from Philip Ahn, including Impact (1949) and Something to Sing About (1937).

Marathons in May on The Film Detective will include birthday anniversary marathons in honor of Vincent Price, including House on Haunted Hill (1959), The Bat (1959), and The Last Man on Earth (1964), and John Wayne, featuring Angel and the Badman (1947) and McLintock! (1963).

Newly restored features coming to The Film Detective this month will include stunning prints of Anna May Wong classics, including Bombs Over Burma (1942), Lady from Chungking (1942), and The Toll of the Sea (1922), and the film noir classic Pitfall (1948), starring Lizabeth Scott, Dick Powell, and Jane Wyatt.

The Film Detective is a leading distributor of restored classic programming, including feature films, television, foreign imports, and documentaries and is a division of Cinedigm. Launched in 2014, The Film Detective has distributed its extensive library of 3,000+ hours of film on DVD and Blu-ray and through leading platforms including TCM, NBC, Amazon, MeTV, PBS, and more. The Film Detective has released its classic movie app on web, Android, iOS, Roku, Amazon Fire TV, and Apple TV and is available live with a 24/7 channel on Sling, STIRR, Plex, Local Now, Rakuten TV, and DistroTV. For more information, visit www.thefilmdetective.com.