Carl Amari, syndicated radio host, producer, and actor, to join as host of The Film Detective Podcast, placing the spotlight on classic radio programs from the old-time radio era. 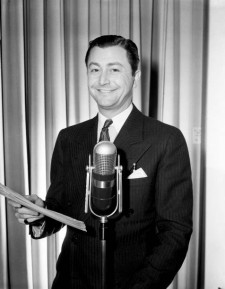 The Film Detective Podcast is uniting two of the most engaging mediums in entertainment history, old-time radio and podcasting, offering a twice-weekly program dedicated to revisiting classic radio shows that ruled the airwaves throughout the Golden Age of Radio.

Radio programs featured on The Film Detective Podcast will include mystery and detective shows like The New Adventures of Sherlock Holmes, The Adventures of the Thin Man, Dragnet, and The Adventures of Sam Spade, Detective; comedies including The Burns & Allen Show, Father Knows Best, and The Jack Benny Program; science fiction and suspense including X Minus One and Suspense; and westerns like Have Gun Will Travel, Gunsmoke, and The Roy Rogers Show. Many of the featured radio shows also have television adaptations that are available to stream on The Film Detective's classic film and television app.

Reaching over one hundred million listeners each month, podcasting serves as the latest initiative in The Film Detective's mission to bring classic entertainment to modern audiences.

"We are excited to bring classic radio to a whole new generation of listeners through The Film Detective Podcast," said Phil Hopkins, President of The Film Detective. "Similar to classic radio, podcasts have redefined audio entertainment, which presents a unique opportunity to bring the beloved shows that once dominated at-home entertainment to today's audiences with modern podcast technology."

The Film Detective Podcast will be hosted by Carl Amari, film producer, syndicated radio host and a foremost authority on the golden age of radio. Through his company, Gulfstream Studios, Amari has spent decades licensing the rights to more than 50,000 hours of original radio programming. Amari has brought radio expertise as producer of multiple award-winning shows, including serving as creator/producer of The Twilight Zone Radio Dramas and producer/host of Hollywood 360.

"These theater of the mind radio programs paved the way for today's podcast revolution and I'm excited to share them with The Film Detective's worldwide audience," said Amari.