The Film Detective will feature films every night in honor of Black History Month and present marathons in celebration of director Oscar Micheaux, trailblazer Ida Lupino, and Valentine's Day. 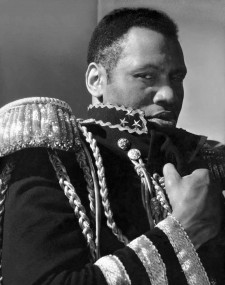 Joining the annual line-up will be new arrivals, including Gil Noble's 1977 documentary about the actor and activist Paul Robeson, Tallest Tree in Our Forest, and the 1948 musical Killer Diller, featuring musical talents like Nat 'King' Cole and the Andy Kirk Orchestra.

Recently passing at age 94, actor and activist Sidney Poitier will be remembered with a showing of his early drama The Mark of the Hawk (1957), also starring Eartha Kitt, on February 20.

Pioneering filmmaker Oscar Micheaux will also be celebrated on February 13, with a showcase of three Micheaux classics, God's Stepchildren (1938), Lying Lips (1939), and Within Our Gates (1920), accompanied by a TFD Original Oscar Micheaux Tribute, narrated by Dana Hersey.

Marathons on The Film Detective in February will include a celebration of filmmaker and trailblazer Ida Lupino on February 4, what would have been her 104th birthday, with a mini-marathon of Lupino classics including The Bigamist (1953), Four Star Playhouse (1952-1956), and The Hitch-Hiker (1953). The Film Detective will also celebrate the season of love on Valentine's Day with romantic classics from Happy Go Lovely (1951) starring David Niven and Vera-Ellen to Mr. Imperium (1951), starring Lana Turner, Ezio Pinza, and Debbie Reynolds. Recently passing at age 87, actor Dwane Hickman will be honored with a marathon of his sitcom The Many Loves of Dobie Gillis (1959-1963) on February 19.

Coming to Blu-ray and DVD from The Film Detective in February will be the first dancing musical in 100% technicolor, Dancing Pirate (1936), on February 22. Nominated for the Academy Award for Best Dance Direction, the Dancing Pirate release features a new restoration from rare, original 35mm archival material, with a brand new 4K scan. Special features include audio commentary and original insert essay from author Jennifer Churchill; Glorious Pioneers: The Birth of Technicolor, an interview with author/historian, David Pierce; and Ambushed By Mediocrity: Remembering The Dancing Pirate, an interview with film producer/historian, Michael Schlesinger.

To pre-order Dancing Pirate on Blu-ray and DVD, visit https://www.thefilmdetective.com/dancing-pirate.