DOOGEE makes a good phone great with the addition of solid security thanks to a highly accurate and fingerprint scanner. A review of the new Y200 from DOOGEE. 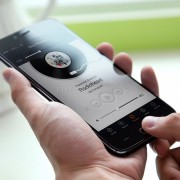 Another crowd-pleasing favorite from DOOGEE, this time they roll out a mid-range handset that pleases tech-gadgets enthusiasts and casual users alike due to its top-notch specifications and features. Taking the lead from bigger brands, the Y200 is the first smartphone in its class to feature a fingerprint scanner, putting performance and security into the hands of budget-conscious buyers for the first time.

The design and build of the Y200 chassis follows the latest DOOGEE trend featuring two polished metal rings around the body with a unique V-groove in the center which not only looks nice, but gives the edges a bit of grip, something that is helpful when trying to use the phone with one hand. It looks a bit like a Samsung in shape and layout and weighs in at a lightweight 158 grams. The back cover has a gorgeous horizontal micro-finish texture that looks and feels great and provides some non-slip benefit. The home button is oval shaped and fits nicely within the overall design giving the phone an elegant look in either black orwhite color.

The DOOGEE Y200 comes with a large 5.5inch IPS OGS capacitive screen with a 1280 x 720 resolution featuring LCD High Definition (HD) technology. The display is definitely acceptable, with bright, vivid colors and sharp contrast. Gamers and movie watchers will appreciate it. It consistently displays accurate and clean images and video with high saturation for daily use, entertainment, or gaming.

The Y200 features front and rear cameras. The rear camera is an 8.0 megapixel (13MP interpolation) with autofocus and flash for taking quality photos even in low light conditions and from short or long distance. A 5.0 megapixel (8MP interpolation) front facing camera is selfie-ready and the camera array features helpful sensors such as proximity sensor, light sensor, and gravity sensor. Overall the camera quality is average to good and performed well when it was tested in varying conditions.

TheDoogee Y200 has a MediaTek MT6735 64bit Quad Core 1.0GHz processor with 2.0 MB of RAM + 16GB of internal storage. If only 16GB of storage is a concern for media hungry users, it is easily expandable up to 32GB. The MT6735 is the latest in its series and performs well, delivering speed and power handily through its installed Android 5.1 Lollipop OS. One reason it performs as well as it does is by letting the reliable Mali-T720 GPU handle some of the load.

The battery is a reasonable 3000mAh capacity. This should equate to something in the area of 2-3 days of standby time and under testing, it provided around 8 hours of talk time. About standard for this class.

Even at its low price, the performance and power package is nice, however the real magic of this phone is the surprising inclusion of a fingerprint scanner. The scanner is built into the home button which is super convenient and was found to be extremely accurate and fast. It has 360 degree recognition which allows the user to lock or unlock the phone securely with a simple press of the button. It also has other important features that can be enabled such as app encryption or camera control. Several sets of prints can be installed, so the phone can be shared while still taking advantage of the extra security. The DOOGEE Smartphone fingerprint scanner is fast, simple, and safe and it’s a fantastic feature usually only found on phones that cost much, much more.

In addition to the phone, charger and cables necessary, this DOOGEE includes some much appreciated extras in the box, including a SIM needle for changing cards, a clear case with screen protector, a cleaning cloth and a nice set of earphones.

DOOGEE is already accepted as one of the best overseas cheap Android smartphone makers and is well known for the solid performance, quality components, and low prices of their phones. But they also have a knack for making sure that each phone release has one feature that makes it special. For the Y200, it is definitely the inclusion of the fingerprint scanner. It’s an incredibly powerful and useful feature and not expected at this price point. Once again, it is predicted that DOOGEE will have the competition racing to keep up and looking at ways to get this next-level feature into their budget phones.

For those willing to accept solid specs and great practicality over some other feature-bloated phones, the Y200 is a smart choice. The reliability of DOOGEE with the added protection and convenience of the included fingerprint scanner, make this an easy choice for most people.