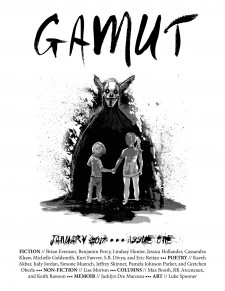 Chicago, IL, January 1, 2017 (Newswire.com) - After months of planning, hard work, and a successful Kickstarter fund of $55,000, the groundbreaking, new literary magazine, Gamut is now available for your reading library. Monthly eBooks and ongoing website content will include mostly original fiction and fiction reprints, but also columns, non-fiction, art, flash fiction, poetry and serialized work. Gamut strives to publish the unrecognized and up and coming voices of several genres.

“I'm excited to see what Richard Thomas brings to the game. Gamut will be the new magazine not written for the little old lady in Dubuque,” says Chuck Palahniuk, author of Fight Club.

"I'm excited to see what Richard Thomas brings to the game. Gamut will be the new magazine not written for the little old lady in Dubuque."

The writers and artists of Gamut magazine walk a fine line between genre and literary fiction. With so many resources available these days, Gamut magazine is working around the clock to showcase high quality, transgressive authors from all around the world. The goal is to include a diverse line-up, publishing genre-bending, hybrid fiction that utilizes the best of genre and literary voices.

Issue 1 of Gamut magazine is now available with your subscription. This issue will feature art by Luke Spooner, and writing by:

“I want to support the voices that aren't getting enough recognition,” says Richard Thomas, owner and founder of Gamut magazine. “I want to pay a great rate (twice the going professional rate) and I want to surround myself with talented authors and artists that inspire me,” says Thomas.

We invite you to start reading Gamut and enjoy a whole year of online membership for just $60 a year – That’s less than 17¢ per day! We also offer eBook only subscriptions, or both eBook and online access. We also sell individual issues at eBooks. You will always have access to our archives, so you can return any day, any time, at your convenience to read our content.

Learn more or read a free sample of Gamut at: www.Gamut.Online today.

Gamut magazine is an online neo-noir, speculative fiction magazine, publishing writing from non-fiction to novellas and everything in-between. They pay ten cents a word (double current industry standard) to their writers. The goal is to include a diverse line-up, publishing genre-bending, hybrid fiction that utilizes the best of genre and literary voices.

Gamut magazine was founded in 2016 by Richard Thomas. Over the past eight years Thomas has written and published over 100 short stories, in magazines such as PANK and Cemetery Dance; three novels—including Disintegration and Breaker at Random House Alibi; and three short story collections.

Thomas, also editor-in-chief of Dark House Press and co-editor with Chuck Palahniuk and Dennis Widmyer of the transgressive fiction anthology Burnt Tongues (a Bram Stoker finalist), and editor of Exigencies (Shirley Jackson Award finalist) has secured a wide range of contributors for the first planned year of Gamut, including a plethora of award winning authors. More information below.

Usman Malik is the first Pakistani to win the Bram Stoker Award, and has been nominated for the Nebula and British Fantasy awards, and reprinted in several Year's Best anthologies.

Kate Jonez has twice been nominated for the Bram Stoker Award and once for the Shirley Jackson Award.

Editor-in-Chief Richard Thomas has been nominated for the Bram Stoker and Shirley Jackson Awards for editing—winning awards at This is Horror, USA Book News, and Indiefab. He has also won contests for his writing at ChiZine and One Buck Horror.

Helen Marshall’s first collection of fiction Hair Side, Flesh Side won the Sydney J Bounds Award in 2013, and Gifts for the One Who Comes After, her second collection, won the World Fantasy Award and the Shirley Jackson Award in 2015.

Brian Evenson received a Creative Writing Fellowship from the NEA, received an O. Henry Award (for his story, “Two Brothers”), and was a finalist for the Edgar Award, the Shirley Jackson Award (three times), and the World Fantasy Award.

Stephen Graham Jones has been the recipient of an NEA Fellowship in Fiction, the Texas Institute of Letters Jesse Jones Award for Fiction, the Independent Publishers Awards for Multicultural Fiction, three This is Horror awards, and nominated for several Bram Stoker and Shirley Jackson Awards

Media Contact: For more information or to schedule an interview, please contact Kya Shore via email: KyaGamut@gmail.com or phone: 540-429- 5777