Uncover the mystery in 'Haven,' a small-town horror debut novel 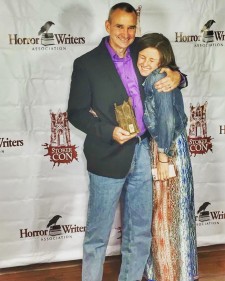 Holliston, Massachusetts, May 3, 2017 (Newswire.com) - Tom Deady took home a Bram Stoker Award® for his debut horror novel, “Haven,” late Saturday night at the StokerCon Bram Stoker Awards® Banquet. The award for superior achievement in a first novel has been around for 30 years, establishing the leading authors in the horror genre.

Tom wrote "Haven" over the course of fifteen years. It was published in 2016 by Cemetery Dance Publications and quickly recommended and nominated for the Bram Stoker Awards®. The novel takes place in a small town in Massachusetts and explores many dark layers of horror and humanity.

"While the novel is obviously for fans of 'Stranger Things' and the classic small-town horror by those like King or Straub, don't let its setting keep you looking in the past. There is a modern perspective behind this tale, similar to Maberry's 'Pine Deep' trilogy or Janz' 'Children of the Dark' (2016). Hand out freely to anyone looking for a solid scare."

“As a writer, I should be able to express my joy at receiving the Stoker Award, but I simply cannot put it into words. It is the culmination of a lot of hard work and incredible support. I am honored to be recognized by the HWA [Horror Writers Association] and blessed that my wife and daughters were on hand to celebrate the moment with me,” says Deady.

Tom Deady has already released another novel earlier this year, "Eternal Darkness," a vampire horror reminiscent of the paperback horror days in sense of style and dread. He promises at least one more release in 2017 and says there are big plans in store. Rumors have also surfaced about a young adult novel in the works. One thing’s for sure, Tom Deady isn’t slowing down. He assures us the Stoker win has only fueled his passion and drive for the craft.

“Completing 'Haven' has unlocked some creative vault inside me. The ideas and stories demand to be put to paper, and I’m doing my best to keep pace. My first novella will be released in September, and I promise it is unlike anything I’ve written to date. I also have a few short stories that should hit this year, and the rumors of a young adult work — possibly a series — are true! Stay tuned for more on that,” says Tom Deady.

ABOUT: Tom Deady is the Bram Stoker Awards® winning author of "Haven" and "Eternal Darkness." He lives in Holliston, Massachusetts, with his wife. Tom has a Master's Degree in English and Creative Writing from Southern New Hampshire University, and is a member of both the Horror Writers Association and the New England Horror Writers.

Learn more at TomDeady.com and follow him on your favorite social media platforms:
​https://twitter.com/deadytom
​https://www.facebook.com/tomdeady