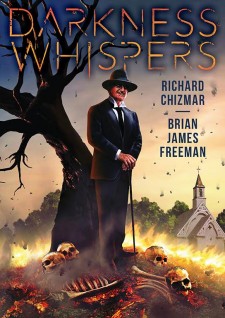 Baltimore, MD, January 17, 2017 (Newswire.com) - ​Richard Chizmar and Brian James Freeman have a new release coming out in early 2017 titled, Darkness Whispers. The print edition is already sold out, but the e-book version is coming soon. Darkness Whispers introduces the town of Windbrook. Nothing changes there. Nothing is different. Except... except today something is different. An old man with piercing gray eyes arrives in town. And he isn't coming alone. Death travels with him.

Darkness Whispers begins as a visit to a golden-hued, idyllic town that soon gets dark. Very dark. I quickly gave up trying to second-guess the formidable authors and simply surrendered to their lead all the way to the shattering conclusion. Chizmar and Freeman know that horror doesn't work without humanity, and with this story they succeed in chilling our blood and breaking our hearts.

With Chizmar and Freeman’s credentials and skills combined, they have created an old-fashioned tale of horror. By the end, the reader will wonder when this peculiar old man is coming. For fans of darkness, horror, and truly chilling tales, Darkness Whispers is the novella for which they’ve been waiting.

Through the old, tattered files of stories acceptances and rejections, Chizmar uncovered one of the first stories he wrote. Inspired by the EC comics of his youth, with the raw potential for a good story, but with room for improvement, he considered revising it. Then, a better idea came. He sent it to his friend and co-worker, Brian James Freeman. Collaborating together, a new story was born.

“What was a short story quickly became a novella, and we never looked back,” says Brian James Freeman. “This one really feels like something you'd find in one of those classic 1980s horror paperbacks. Working on Darkness Whispers was a blast,” says Freeman.

"Darkness Whispers begins as a visit to a golden-hued, idyllic town that soon gets dark. Very dark. I quickly gave up trying to second-guess the formidable authors and simply surrendered to their lead all the way to the shattering conclusion. Chizmar and Freeman know that horror doesn’t work without humanity, and with this story they succeed in chilling our blood and breaking our hearts,” says Ray Garton, bestselling author of Live Girls and Crucifix Autumn.

While the limited edition of Darkness Whispers by Scarlet Galleon Publications has sold out, an e-book edition is coming soon from Cemetery Dance Publications. Don’t miss out on Darkness Whispers and be the first to know when the e-book pre-order link goes live by signing up for updates from Richard Chizmar here and Brian Freeman here. This is one 2017 read you won’t want to skip.

Richard Chizmar, Award-Winning Author of A Long December, has edited more than 30 anthologies and his fiction has appeared in dozens of publications, including, Ellery Queen’s Mystery Magazine and The Year’s 25 Finest Crime and Mystery Stories. He has won 2 World Fantasy Awards, 4 International Horror Guild Awards, and the HWA’s Board of Trustees Award.

Chizmar’s work has been translated into many languages. He has appeared at numerous conferences as a writing instructor, guest speaker, panelist, and guest of honor.

Richard is the owner & founder of Cemetery Dance Publications. He is the creator/writer of Stephen King Revisited.

Freeman sold his first short story when he was fourteen years old and his first novel when he was twenty-four. His novels, novellas, anthologies, short stories, essays, and interviews have been published by Grand Central Publishing, Cemetery Dance Publications, Borderlands Press, Book-of-the-Month Club, Leisure, Random House’s Hydra imprint, and many others.

His essays, columns, and interviews have been published in every volume of The Stephen King Library Desk Calendar from 2009 through 2014 (Book of the Month Club), Jobs in Hell, Hellnotes, and Cemetery Dance.

He is also the managing editor of Cemetery Dance Publications, the publisher of Lonely Road Books, and the founder of Books to Benefit.

For more information or to schedule an interview with Richard or Brian, please contact