The 13 Ugly Men Foundation Announces Charitable Donation of $25,013.13 to Support the American Foundation for Suicide Prevention 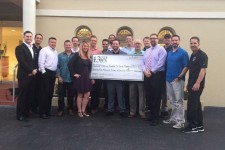 The donation was raised during the foundation’s annual Halloween party, 13 Ugly Sins, held this past October at the District 3 Arts & Events Venue located in Downtown Tampa. A sold out crowd dressed up and came out to “Party With a Purpose” while enjoying DJs & décor in a unique upscale environment. The event was a huge success and marked another remarkable year of giving back to the community.

“The community really embraces what we do at these events and our partnerships in the Tampa Bay area have really made these events grow year over year,” said event Chair Matt Loyd. 13 Ugly Men President David Moyer added, “We continue to make the 13 Ugly Men events both fun and engaging. Working with a great organization such as the American Foundation for Suicide Prevention really opened our eyes on what an epidemic this is and we are honored to bring awareness to this cause.”

Suicide is the tenth leading cause of death in the United States, yet suicide is preventable. More than 900 people participated in St. Petersburg’s annual Out of the Darkness Community Walk which supports the American Foundation for Suicide Prevention by raising funds to educate, advocate, and implement suicide prevention initiatives and programs in support of those impacted by suicide. The event was held on October 24, 2016, and was hosted by the American Foundation for Suicide Prevention and sponsored by the 13 Ugly Men Foundation.

“We walk to raise awareness about this important health issue. Suicide touches one in five American families. We hope that by walking we save lives and bring hope to those affected by suicide,” said Jason Tompkins, Chairman of the Tampa Bay Chapter of the American Foundation for Suicide Prevention.

“These walks are about turning hope into action,” said Tara Sullivan, Central and Southern Florida Area Director. “Suicide is a serious problem, but it’s a problem we can solve. The research has shown us how to fight suicide, and if we keep up the fight the science is only going to get better, our culture will get smarter about mental health, and we’ll be able to save more people from dying from depression and other mental health conditions.”

The 13 Ugly Men are currently in the process of planning more events and reasons to “Party With A Purpose” and thank and encourage the continued involvement of the Tampa Bay community. To find out more, please go to http://13uglymen.com/.

The 13 Ugly Men first began in the early 1990’s as a group of 13 members, and steadily grew to 31 members. Over the years, the Foundation has raised nearly a million dollars for deserving charities in the Tampa Bay area. The 13 Ugly Men’s passion lay with charities and organizations that support children’s issues, women’s issues, crisis intervention, law enforcement, and our service men and women. The 13 Ugly Men operate their Foundation with a 0% administrative overhead, meaning zero of the proceeds from their events go towards paying for operational expenses incurred by the Foundation in the normal course of business. In addition to the annual Halloween party, the 13 Ugly Men host other signature events throughout the year to raise money for charities every year. The 13 Ugly Men have been honored with numerous awards throughout the years, including the Champions for Children Award (2009), presented by Voices for Children, the Business Partner of the Year Award (2012), presented by the Tampa Police Department, the Tampa Bay Lightning Community Hero Honor (2015), and the Children’s Dream Fund as DreamMaker of the Year (2016). For more information, please visit http://13uglymen.com/.

About the American Foundation for Suicide Prevention

The American Foundation for Suicide Prevention is dedicated to saving lives and bringing hope to those affected by suicide. The AFSP creates a culture that’s smart about mental health through education and community programs, develops suicide prevention through research and advocacy, and provides support for those affected by suicide. To learn more, please visit https://afsp.org/.