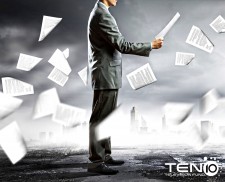 Ft. Worth, Texas, March 1, 2017 (Newswire.com) - TEN10 Television (TEN10 TV), a leading provider of high-end television content, announced today the launch of the next phase of their television fund and a multi-show development deal with strategic partner EUE/Sokolow Entertainment, who are behind National Geographic's first scripted series, GENIUS, a global television event premiering on April 25, 2017.

In making today's announcement, TEN10 TV Chief Executive Officer Steven Camp stated, "Finalizing the slate of (9) TV shows with our Series ‘A’ round of financing was a significant milestone pointing to the future of our company.  Now we will formally take our next steps launching this second phase, and will continue to work very closely with our colleagues at EUE/Sokolow Entertainment.”

TEN10 Television Fund (2) LLC is the second phase of TEN10’s television fund.  In the first phase – working closely with EUE/Sokolow Entertainment, an independent television studio founded by producer/director Jeff Cooney and veteran television producer Sam Sokolow – TEN10 Television funded the development and production of (9) TV pilots, including: the half-hour comedy “Co-Op” starring Zac Levi in partnership with Middleman Productions and show-runners John Lehr and Nancy Hower, a scripted comedy “Diplomatic Immunity” with celebrated Australian comedy troupe The Peloton, a reality show “Faith Swap” with Executive Producer Lisa Ling, and a WWII 3-part documentary series “Before I Forget”, along with several other pilots with recognizable Hollywood show-runners, writers, and A List TV celebrities and entertainers.  The Company and its investors will retain a significant equity portion in each of its respective TV Properties, resulting in a library of powerful television assets that will generate recurring high margin revenue.  http://ten10televisionfund2.com

Also, commenting on today's announcement, was TEN10 TV’s Chief Operating and Chief Compliance Officer Joseph Pizzarelli.  “We are using this funding to aggressively expand our slate of high-end television show properties.  After spending over 20 years on Wall Street, I was thrilled to join a team of equally driven partners like Steven and Josh and put my financial services experience toward a dynamic product such as TV and film finance and production.  When former colleagues, friends and potential investors ask me what sets this opportunity apart, the obvious answer is our relationship with Sam Sokolow and Jeff Cooney, our exciting and relevant projects and this team’s ability to be exceptional and honorable stewards of investment dollars.”

Jeff and Sam are currently executive producers on ‘GENIUS’, a straight-to-series order by Nat Geo that is being produced in partnership with Fox 21 Studios, Imagine Entertainment and OddLot.  The first season of ‘GENIUS’ is based on Walter Isaacson’s best seller ‘EINSTEIN’ and has Ron Howard directing the first episode, Ken Biller on as show-runner, stars Geoffrey Rush as Albert Einstein, and was advertised in commercials during Super Bowl LI.

"EUE/Sokolow has created a unique avenue for independent money to play at the highest level of the lucrative global television marketplace, which is something that has rarely, if ever, previously existed.  As one of the few truly independent television companies working in the premium television business in Hollywood, we are excited and honored to have the productive working relationship that we do with Steven Camp and the team at TEN10 Television," said EUE/Sokolow Entertainment President Sam Sokolow, from their Beverly Hills office.

Moving forward, TEN10 Television plans to leverage its financing and independent studio platform to retain large ownership stakes of TV Properties and capitalize on the major revenue drivers of a television property, including domestic distribution, foreign distribution, first-run syndication, VOD and downloads, and ancillary revenues. TEN10’s independence and deep industry relationships enhance its ability to sell TV Properties in an open market, free from corporate mandates, and offer premium original content to every network and outlet. TEN10 Television will employ a business model focused on progressive financing of projects to fund deficits and generate profits. The Company and its investors will retain a significant equity portion in each of their respective TV Properties, resulting in a library of powerful television assets that will generate recurring high margin revenue and high margin cash flow generation year over year.

Here is what our investors are saying:

“I am very impressed with the transparency of the financial reporting on each show in production.  In addition, it is refreshing to see the passion of the executives at TEN10 TV and at EUE/Sokolow for the work they do.”   (Jerry B. Investor)

“Over the years, I have invested in just about every standard investment you can imagine, stocks, bonds and lately I’ve done well in real estate.  This investment into the TV fund is by far and away the most exciting of them all.  Based on what I’ve seen in the first phase, this one could have the most potential as well.  My Wife and I joined about twenty other investors for the “Diplomatic Immunity” shoot in Malibu, CA, and had a blast.  We intend to visit every production shoot we can.  Steven and the TEN10 TV team have been honest, straightforward and have been very clear about the risks vs. rewards in this fund.”  (Kirk B. – Investor)

TEN10 Television was founded by Steven Camp, Joshua Mills and Joseph Pizzarelli, for the sole purpose of raising capital, and then allocating that funding into the development, packaging and production of television show properties to be pitched to major networks. The company was founded by a team of Wall St. and Chicago finance and deal making veterans focused on providing a unique ‘alternative investment’ or non-traditional type asset class opportunity, to accredited and institutional investors. For more information visit http://www.ten10television.com/ or call Katy Hodges (817-632-5050).

EUE/Sokolow Entertainment is an independent television studio with a proven track record, A-List relationships and dynamic infrastructure required to develop the highest quality television content in a forward-thinking business model designed specifically for today’s television entertainment. EUE/Sokolow attracts high-end talent to develop television properties to be sold directly to network decision makers. What makes EUE/Sokolow unique is their use of their production infrastructure and pilot/presentation experience.

Founders Jeff Cooney and Sam Sokolow are currently in production on GENIUS, a straight-to-series order by Nat Geo that will be produced in partnership with Fox 21 Studios, Imagine Entertainment and OddLot. The first season of GENIUS will be based on Walter Isaacson’s best seller EINSTEIN with Ron Howard slated to direct and Ken Biller signed on as show runner. Cooney and Sokolow recently completed a pilot for Freeform called 23 and THE REAL SVU, a true crime pilot for Lifetime Movie Network. In the last several years, Cooney & Sokolow have set up shows as executive producers at HBO, ABC, NBC, Freeform, Nat Geo, TNT, E!, Lifetime Movie Network, HLN, OWN & Travel Channel.

*  The information contained in this email or documents enclosed shall NOT be copied, distributed or discussed in whole or in part to others without the prior written consent of TEN10 Television LLC (TTV).  This information has been prepared solely for establishing the business objectives of TTV and for formulating specific strategies for achieving these objectives.  Nothing contained therein shall be construed as an offer to sell securities relating to TTV.  Any such offer will be made solely by means of a 'Prospectus Offering' prepared by the TTV Legal Team.

*  Investors into TEN10 projects must be 'Accredited Investors'.  Securities Laws define the term 'Accredited Investor' in Rule 501 of Regulation D as either: a natural person who has an individual net worth, or joint with spouse, that exceeds $1million (excluding the value of the primary residence) at the time of the purchase – OR - a natural person with income exceeding $200,000 in each of the two most recent years or joint income with spouse exceeding $300,000 for those years and has a reasonable expectation of the same income level in the current year.