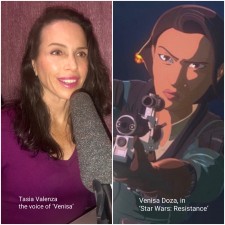 Valenza shared on her Instagram (@TasiaValenza), “She (Venisa) is a wise warrior woman and a maternal mother who is both courageous and strong, kind and compassionate, and lives by her ideals even if it means tremendous sacrifice.”

An accomplished human Resistance pilot, Venisa is the mother of Torra, and wife of Captain Imanuel Doza, Captain of the Colossus.

Germain Luster, of Gizmodo.com, notes that Venisa is “one of the coolest characters on Resistance yet” and “And she made us wish she’d been there from the beginning … Venisa’s story is so good, and so wrapped up in Star Wars lore, it’s a shame it gets told to us via quick, third-person exposition. Really, her story could have been the entire plot of this show.” (Link to full read)

Venisa is Valenza’s second foray into the Star Wars universe, having voiced Jedi Shaak Ti in Star Wars: The Clone Wars. “Jedi Shaak Ti is cool, calm and collected, as well as powerful in her channeling of The Force. I am truly honored to have been invited by Lucas Film into the Star Wars universe. With every character I have an opportunity to portray, I feel as though a touch of their essence is left with me.”

Beyond Star Wars, Valenza has voiced such iconic characters as the seductress Poison Ivy in the Batman: Arkham Series, Sniper Wolf in the fan-favorite Metal Gear Solid games, and Ultimecia in the Dissidia Final Fantasy series. Additionally, she created Give Great Voice, a personal development platform that teaches individuals how to recognize and utilize the power of their voice for personal and business success.

For more on E winner Tasia Valenza, the voice of Venisa Doza, visit http://tasiavalenza.com/ @TasiaValenza on all socials

Giving Great Voice (GGV) is a platform dedicated to the art of confident verbal communication. Created by Tasia Valenza, GGV brings a unique technique to revolutionize the way to use one's voice to achieve personal and professional success.

How to Touch in a 'Socially Distant' World
TEDx Speaker, Tasia Valenza, brings counterbalance to "social distancing" - How to touch and be "socially distant."
Giving Great Voice - Tasia Valenza - Mar 13, 2020