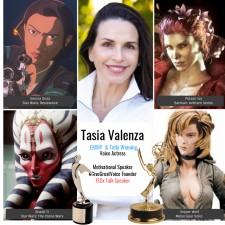 LOS ANGELES, February 25, 2020 (Newswire.com) - ​Voice is a surprisingly powerful tool. And it can be easily trained. In an entertaining and tip-filled TEDx Talk, EMMY and Telly-winning voice actress and motivational speaker Tasia Valenza shares her unique and simple techniques on how to use tone and intent to #GiveGreatVoice in everyday speech.

Valenza shares, “The way people speak to themselves and others is pivotal to their success. Our voices complement the roles we play and our intentions when relating to one another. When we employ these influential skills can enhance both professional and personal relationships. Messages will be received the way they were intended.”

TED is a nonprofit organization devoted to Ideas Worth Spreading, usually in the form of short, powerful talks (18 minutes or fewer) delivered by today's leading thinkers and doers. Many of these talks are given at TED's annual conference in Vancouver, British Columbia, and made available, free, on TED.com. TED speakers have included Bill Gates, Jane Goodall, Elizabeth Gilbert, Sir Richard Branson, Nandan Nilekani, Philippe Starck, Ngozi Okonjo-Iweala, Sal Khan and Daniel Kahneman.

TED's open and free initiatives for spreading ideas include TED.com, where new TED Talk videos are posted daily; the TED Translators Program, which provides subtitles and interactive transcripts as well as translations from thousands of volunteers worldwide; the educational initiative TED-Ed; the annual million-dollar TED Prize, which funds exceptional individuals with a "wish," or idea, to create change in the world; TEDx, which provides licenses to thousands of individuals and groups who host local, self-organized TED-style events around the world; and the TED Follows program, which selects innovators from around the globe to amplify the impact of their remarkable projects and activities.

Giving Great Voice (GGV) is a platform dedicated to the art of confident verbal communication. Created by Tasia Valenza, GGV brings a unique technique to revolutionize the way to use one's voice to achieve personal and professional success.

How to Touch in a 'Socially Distant' World
TEDx Speaker, Tasia Valenza, brings counterbalance to "social distancing" - How to touch and be "socially distant."
Giving Great Voice - Tasia Valenza - Mar 13, 2020