Video game, film and television actress Karen Dyer aka Eva La Dare, well known for her nominated voice and motion capture performance as Sheva Alomar in Resident Evil 5 and voice work as Elena in the Street Fighter series, is giving video game fans a chance to see her dressed in cosplay by premiering original prints as rewards on the Kickstarter page for her new action spy TV series, A DARE TO REMEMBER. 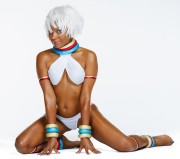 Los Angeles, February 17, 2016 (Newswire.com) - Starting February 17th, Eva will premiere her cosplay pics during her 30 day Kickstarter campaign. The pledge for each autographed print will go towards the pilot episode of her action spy series, A DARE TO REMEMBER, written and produced by the actress, which is loosely based on her real life as a burlesque artist. Eva will play Nina Monroe, a circus performer on the run for murder who is forced to become a Mata Hari spy for the Japanese government in order to stay alive. Eva's love for Luc Besson films was a huge inspiration for the project. Viewers can preview a ten minute pilot episode on her Kickstarter page.

After the huge response to the release of her Sheva Alomar calendar during Comic-Con 2009, requests for Eva to dress up again grew after the actress started voicing the Elena character for the Street Fighter series in 2011. "It's always fun to get into character from head to toe! Most of the time I'm just in the booth doing the voice, but when people started asking about it, I thought, why not?" Photographer Rollence Patugan, who shot her Sheva Alomar calendar in 2009 was brought in again to capture the images.

"It's a project I've been developing over the last couple years and to finally see it come to life means so much! Especially during a time when diversity in the entertainment industry is being brought to the forefront. Sheva Alomar was the first playable African-American character for the Resident Evil series. I think that was important for the video game industry and the fans that felt represented by her. Cultivating a female African-American action heroine has been a dream of mine, so now's the time to make it happen!"

Other rewards are also available for supporting the project, from personal voice recordings, signed limited edition art prints, one-line speaking roles, and live performances by Eva. The campaign goal of $75,000 will be used to produce the two-hour pilot with any additional funds going towards future episodes. "I want to bring in as many celebrity cameos as possible, from the video game world as well as the film and television industry so we can guarantee solid distribution and build an audience. My target is to get this streaming on Hulu, Netflix, or Amazon Prime."

The A DARE TO REMEMBER Kickstarter page and cosplay prints can be found at: http://kck.st/1mGOVmG