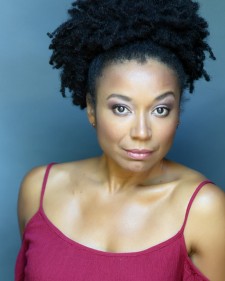 Los Angeles, CA, December 7, 2016 (Newswire.com) - Video game, film and television actress Eva La Dare has signed on as a recurring role on FX’s comedy series, Baskets, premiering January 19th, 2017. The series, which follows a man, played by Zach Galifianakis, pursuing his dream of being a professional clown in his hometown of Bakersfield, California, was renewed for a second season after its successful breakout premiere in February, when it was deemed the most-watched basic cable comedy series premiere since 2014 with 1.75 million viewers.

Additionally, La Dare (also known as Karen Dyer), who is the voice and motion behind the popular Resident Evil 5 character, Sheva Alomar, which was re-released this summer on PlayStation 4 and Xbox One, can currently be heard as part of the cast on the recently released Call of Duty: Infinite Warfare.  Eva is best known as the voice and motion of Capcom's newest female lead character, Sheva Alomar, from the video game Resident Evil 5. The role introduced her to the world of gaming and earned her the award for Best Supporting Role at the 2009 MTV Game Awards. The Academy of Interactive Arts and Sciences also nominated her, along with Jack Black and Mark Hamill, for Outstanding Character Performance in 2010. Eva is also the voice of Elena in Capcom’s Street Fighter series.

Her recent film and television credits include roles on ABC’s How to Get Away with Murder, Amazon’s Bosch, Hulu’s The Mindy Project, CBS’s NCIS and Mike and Molly, Life After Beth (with Aubrey Plaza, Dane DeHaan and John C. Reilly), and the musical film Idlewild starring Andre 3000 and Big Boi of Outkast.

About FX - FX is the flagship cable channel of FX Networks, owned by 21st Century Fox. It is the home of hit TV series like The Americans, Fargo, AHS, Archer, Baskets and Atlanta. FX primarily features original drama and comedy series and reruns of theatrical films and "broadcast network" sitcoms. As of July 2015, FX is available to over 90,000 paying television households in the United States.

About Capcom - Capcom has been a developer and publisher of video games, known for creating multi-million-selling franchises such as Mega Man, Street Fighter, Resident Evil, Devil May Cry, Ace Attorney, and Monster Hunter. Established in 1979, it has since become an international enterprise with subsidiaries in North America, Europe, and East Asia.