Singer, Songwriter and Guitarrist Eljuri Is Currently Recording Her Third Studio Album to Be Released This October 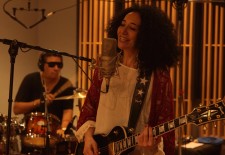 Los Angeles, CA, June 30, 2016 (Newswire.com) - ​Cecilia Villar Eljuri (‘Eljuri’) is immersed in the process of bringing a new album to life. “I continue to look at myself, my journeys passed and my path forward — I’m evolving and embracing it,” says Eljuri. She has tentatively titled the album, ‘La Lucha’ (‘The Fight’) which alludes to her lyrical messages of global significance.

Leaning on her successful 20-year history as a musician, leader, innovator and mentor, Cecilia Villar Eljuri has decided to self-produce this, her third solo album. With support from her manager, Alexandra Gatje from Manovill Records who steps up again as Executive Producer for the project, they have cherry picked their dream team for the recording, production, mixing, mastering and promotion of this collection of songs.

While touring in Mexico, United States, Colombia and debuting in Canada in support of her previous album ‘Fuerte’, Eljuri was gathering the meaning and inspiration for this her third solo album. Self described primarily as a songwriter, Eljuri found herself digging deeper than ever into discovering both her Spanish and Lebanese roots. So, she built her dream home studio, a creative oasis in which to craft and fine-tune the introspective lyrics and rich melodies before making the selection of the eleven tracks to include on this album.

Zach says, “Occasionally a gig comes our way that represents an opportunity to for us to grow musically. In every sense, the Eljuri sessions have been one of those gigs.” Recording together for the first time, Teese Gohl (Nana Vasconcelos, Dave Stewart, John Forte) lends Eljuri his considerable talents as Vocal Supervisor. Eljuri is thrilled to get these tracks to Gustavo Borner (Elton John, Julieta Venegas, Carlos Santana) of igloo music in Los Angeles. As the producer of her last album, ‘Fuerte’, the multi-Grammy winner will mix and master this album.

Playing on the strengths of each member of the Eljuri ‘family’, Cecilia has called once again on the complex rhythms and deep pocket of her long-time drummer, Alex Alexander (David Bowie, Eminem, Youssou N’Dour). The bass performances are split between Johnny Pisano (Deborah Harry, Marky Ramone, Ryan Adams) who rocks the tunes reflecting a funky edge and Tracy Wormworth (B52s, Sting, Wayne Shorter) whose phat and groove-driven bass lines push the pulse of Eljuri’s songs. Reconnecting for the third time with the infamous reggae duo Sly & Robbie, Eljuri collaborates with them on a heartfelt latin-tinged roots reggae song.

A few weeks ago at the Mamapalooza Festival, Eljuri played two of her new tunes during a performance linked to the NYC Parks Summer on the Hudson music series. She and her musicians expressed great excitement to play these songs live, feel their effect on a welcoming audience and release some of the pent up energy that built up in the recording studio.

Expect the new disc to include tunes from this compulsive genre-fuser ranging from latin-inflected reggae, to trip-hop flavored bolero featuring layers upon layers of her vocal hooks and harmonies and iconic guitar solos and licks. With this collection of songs, Eljuri reaffirms her relevance in a constantly changing global music landscape.

Colombian Artist Yeison Jimenez Sets Off New Single 'El Desmadre' Throughout All of America
One of the most popular music artists from Colombia sets foot internationally with his latest song and video, a mix of regional Mexican and regional Colombian music
ER:M+M - Oct 17, 2019

This is Why "10 Years With Bebe" Has Become a Powerful Music Documentary and an Intimate Portrait of This Unique and Controversial Spanish Artist
Hernán Zin, Director of the Documentary Nominated for the Latin Grammy and Bebe's Former Significant Other, Summarizes 2 Years of Filming the Documentary in over Twelve Countries.
ER:M+M - Oct 20, 2016