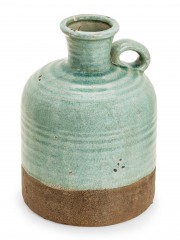 ​This week, artisan home-goods company Gaia began to sell a new addition to their small-batch pottery line: the Batch #332 Hand Glazed Vase. The piece is the second individual vase released by the company this week, who also announced recently the debut of a two-vase set.

Photos published this week by the company reveal that their Batch #332 vase is similar to Gaia’s Batch #218 Tall hand Glazed Vase, in that a pale turquoise hue highlights both pieces. Also of note is the decision by Gaia’s potters to leave, in varying degrees, a strip of unpainted clay at the base of both vases.

Yet that’s where the similarities between the two pieces cease. The Batch #332 takes a shorter, wider form as opposed to the slender profile of the Batch #218 vase. The #332 piece resembles an old-fashioned jug.

Its body is squat, square and wide. This hefty form quickly gives way to a slender neck that widens near its lip. A small, round handle sits on the shoulder of the vase.

While other pottery creations in Gaia’s catalog emanate a sense of history and exploration in Asian countries like Thailand and Japan, this particular vase has a more French feeling.

One can imagine a farmer filling the just with water from a nearby creek, then hefting the piece out to the pasture where its cool water will spell him when the sun hangs heavy at midday.

The vase measures 10.6 inches tall and 7.7 inches in diameter.

“This Hand Glazed Vase fits the eclectic décor in your home,” the vase’s product description reads. “The vase is waterproof and can be used in a variety of ways to help you decorate with style.”

Like all pieces of pottery in Gaia’s line, the vase was fired in a kiln at more than 2,000 degrees Fahrenheit.

The past few weeks have been busy ones for Gaia. The company announced the launch of six new pieces or sets of pottery. Each piece is unique, in that it has its own idiosyncrasies in color, shape and texture.

Gaia’s website notes that each piece they fire, paint and glaze is meant to enhance the experience of the increasingly rustic tastes of the average consumer.

The company’s emphasis on small-batch production is right in line with those rustic tastes, appealing to shoppers who want hand-made, not machine-made, works of art.

The Batch #332 Hand Painted Vase is available for purchase for $187 on the Gaia website, http://www.gaiacollection.com. The vases companion piece, the Batch #218 Tall Hand Glazed Vase, can be bought on the site for $224.

For more information about Gaia’s philosophy of design, go to http://www.gaiacollection.com/pages/about-us-1.

Each piece in the innovative Gaia Collection is part of an artisanal process used to create exceptional and eclectic items for your home.

New Hand Glazed Vase Batch #259 Set From Gaia Hearkens Back to a Different Era
Gaia, a popular handmade pottery company, recently announced the debut of their Batch #259 Hand Glazed Vase Set, a pair of pieces which have the power of imagination.
Gaia Collection - Feb 5, 2016