Gaia, a popular handmade pottery company, recently announced the debut of their Batch #259 Hand Glazed Vase Set, a pair of pieces which have the power of imagination. 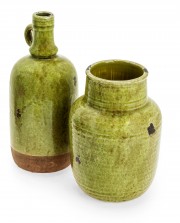 United States, February 5, 2016 (Newswire.com) - Well-crated pottery has the ability to take you to a different time in place.

Gaia, a popular handmade pottery company, recently announced the debut of their Batch #259 Hand Glazed Vase Set, a pair of pieces which have the power of imagination.

One look at the photos of the products featured on the company’s website reveals a pair of vases which seem to be pulled from the ruins of an ancient temple amid lush jungle in Thailand.

Part of the mystical nature of these vases is their weathered appearance. Irregular stains, black marks and color gradients envelope the porcelain clay with which they were made.

The shorter of the two pots features a pattern of irregular circles that circumnavigate the entire piece. And perhaps the most striking aspect of this set is the enchanting green coloration selected by the craftsmen who formed these pieces.

Because of the weathered appearance and the glaze hand-painted by Gaia’s craftsmen, the green tones of the pots take on an almost ancient feel, as if they’d been hidden for hundreds of years before being discovered by an unsuspecting adventurer.

And this is likely the set’s most masterful characteristic. When paired together in a living room or open area in a home, they automatically invoke the curiosity of visitors. Imaginations are liberated and each detail of each vase is another chapter in an imagined story of adventure, history and artistry.

According to the product description made available by Gaia, the pair of vases were fired in a kiln at 2192 degrees Fahrenheit to fortify the pieces for durability.

“Whether you use it for displaying flowers or as decorative pieces on a shelf or your countertop, the Hand Glazed Vase Set fits in with the eclectic décor in your home,” the set’s product description reads.

The Hand Glazed Vase Set is available for purchase on the Gaia website for $255.

Several other pieces were recently added to Gaia’s line of handcrafted pottery. In a press release sent out in the past few days, Gaia detailed their Hand Glazed Pot Set, a stunning trio of pots crafted from concrete.

The trio features the same charming irregularities evident in the vase set, a nod to the unique and ever-evolving hands of the artists who made the pot set.

Four other handcrafted items were launched by Gaia as well, each one a testament to the company’s philosophy of design.

That philosophy is included in Gaia’s Our Creative Process page, where they explain why they’ve chosen to offer handmade products as opposed to mass-produced pieces common at big-box stores.

Part of their motivation, the page says, is to introduce customers to the beauty and individuality of artisan pieces. In a sense, these types of homeware items are a dying group and Gaia’s pottery collection gives people a chance to buy not just a functional piece of pottery, but an heirloom.

Each piece in the innovative Gaia Collection is part of an artisanal process used to create exceptional and eclectic items for your home.