Scientologist Tells Us What Is Scientology?

A writer recently approached Tad Reeves, who runs the Scientology Parent website, asking him to relate a few things about his beliefs and what they've done for him. Here was his response. 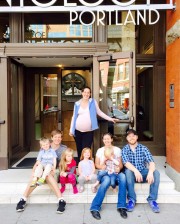 Portland, OR, March 30, 2016 (Newswire.com) - Scientology is a 62-year-old religion, founded by American philosopher L. Ron Hubbard.  Our first Churches opened in 1954 in L.A. and Washington, DC, and it is now a global movement.  Scientology is an applied religious philosophy.  That means that Scientology as a religion is something you do, rather just something to simply believe in.

Some key tenets that make up much of the backbone of the religion:

I think a huge part of our participation in Scientology has been the constant opportunities for productive introspection upon our goals, our strengths and our shortcomings, and it has given so many avenues to improve areas where we feel we could do better. As parents, we don't have any other standard than wanting to do the best job possible for our kids, which is what it's all about anyhow.

·      That the individual is spiritual in nature, not just a bag of meat and fluids, and that there is so much more to an individual than his or her body.

·      That it is possible to know about the mind, spirit and life—meaning solutions to your problems as an individual, a family or group member, are not out of your hands, and that no matter how hard those problems are, something can be done about them.

·      Scientology contains intensely workable solutions for anything you want to better in your life.

Can you briefly describe auditing?

T.Reeves: My wife completed a number of Scientology auditing (spiritual counseling) actions while pregnant with our third baby—a factor that she lists as one of the big reasons the birth went as emotionally smoothly as it did.

Auditing is one of the fundamental practices of Scientology, and is a set of counseling techniques which (1) help the individual rid themselves of spiritual disabilities, and (2) help the individual increase his own spiritual abilities.   Auditing actions done in Scientology address specific areas of a person’s life that they wish to handle, and help them to become happier, more stable and more able to handle life.  These procedures are arranged in a gradient approach on what we call The Bridge to Total Freedom (or The Bridge).  There is a great video which explains the practice of auditing but I’ll give a few specifics for an idea of how this can help other parents as it has helped us.

An auditing action most Scientologists do early in Scientology is known as Objective Processing.  The aim of this procedure is to help a person gain the ability to live in the present moment, able to handle and react to life as it is right now, as opposed to having one’s attention stuck in the past or somewhere else.  With all of the things in our modern world that can have the effect of driving one AWAY from living in the present (drugs, alcohol, video games, mobile devices, etc.) the importance of being able to react sanely in the here and now can’t be overstated.

Another auditing action usually done early in auditing addresses the subject of Problems.  Have you ever seen someone that always seemed to have problems, and no matter how hard you tried to solve their problems for them, they always seemed to invent more ways that their life was a problem?  This Auditing action addresses why a person feels he needs to have problems to survive, and allows them to spot the source of problems and make them vanish.   Both my wife and I have received this auditing and the calm it’s brought to our home is amazing.  We’re both more constructive when it comes to solving the problems of the family (we have 3 kids so of course, there are many!) and we don’t get mired into having our “pet problems” that never seem to go away.

There are numerous other auditing actions addressing one’s ability to communicate, one’s ability to deal with upsets and major changes, marriage counseling to sort out a marriage that is in trouble, and whole array of techniques dealing with past incidents of pain and painful emotion that can kick in and adversely affect how one handles the present.

How has it helped your family?

T.Reeves: There’s almost no way it hasn’t helped. I’d say the biggest benefit has been the general emotional and personal stability that we’ve gained through Scientology.  My wife and I have found that the more we’ve done in Scientology, the more even-keeled we are as individuals and as parents despite the inherent confusions and stress that comes with having three kids.  We’ve found ease in being able to communicate about problems we face as a family, and can therefore be a more unified and involved team when it comes to working with our kids, and our broader goals as a family.

I think a huge part of our participation in Scientology has been the constant opportunities for productive introspection upon our goals, our strengths and our shortcomings, and it has given so many avenues to improve areas where we feel we could do better.  As parents, we don’t have any other standard than wanting to do the best job possible for our kids, which is what it’s all about anyhow.

Much of the space on my Scientology Parent website has been devoted to explaining in detail the little ways my religious beliefs have influenced my approach to family, as well as stories from other families on the same.

Mother of Three Reflects on the Secret of Her Success
A Scientologist shares her story of coming to terms with a rough childhood and overcoming her doubts and fears about being a mother and raising kids.
ScientologyParent - Dec 24, 2016