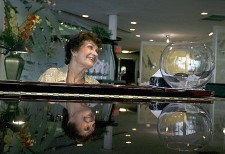 Tampa, FL, May 5, 2016 (Newswire.com) - Per Newsone.com one in four children in the US are being raised by a single parent – a percentage that has been on the rise and is higher than other developed countries. Rapid changes in American family structure over the many decades have altered the concept of what is considered a “traditional” family, becoming more complex and multifaceted.

Despite the composition of today’s families, the strength and love in those families is more important than ever. To celebrate those caring and raising children, The Way to Happiness Association of Tampa Bay held a Piano concert in the Historic Bank of Clearwater Lobby. The event was  hosted by the Scientology Information Center on Sunday May 1st from 6-8pm. Over two dozen guests ranging from their teens to their 80’s attended the concert, including mothers, grandmothers and families.

"The event has been so uplifting and beautiful. I feel a renewed sense of hope about the possibility of reconciling with my family."

Kathy Roberts, a mother and a grandmother herself, entertained the audience with 40 years of piano skill.  Versatile in all genres of music, Ms. Roberts played her list of most popular requests as well as individual requests from the audience.

“This concert was wonderful! It reminds us of Europe and the Metropolitan Opera in New York. I’m really happy that we were able to attend. Please let us know when you are planning more,” stated a Greek couple formerly living in New York. Another guest stated, “The event has been so uplifting and beautiful. I feel a renewed sense of hope about the possibility of reconciling with my family.”

“When people learn simple common sense advice on how to deal with the challenges families face, they have a better understanding of each other and they tend to be happier,” stated Ms. Cranton.

“Children can reconcile their differences with their parents. Before any shouting begins, one can at least try to talk it over quietly. If the child is frank and honest, there cannot help but be an appeal that will reach. It is not always easy to get along with others but one should try,” wrote Mr. Hubbard. “One cannot overlook the fact that almost always, parents are acting from a very strong desire to do what they believe is best for the child.”

Upcoming events in the Information Center are: May 11th, Local Business/Chamber of Commerce Reception and; May 27th, Open House Reception. For more information or to attend future events please contact Amber Skjelset (Manager) at 727-467-6966 or e-mail her at amber@cos.flag.org.

About the Church of Scientology:

Mother of Three Reflects on the Secret of Her Success
A Scientologist shares her story of coming to terms with a rough childhood and overcoming her doubts and fears about being a mother and raising kids.
ScientologyParent - Dec 24, 2016

Scientologist Tells Us What Is Scientology?
A writer recently approached Tad Reeves, who runs the Scientology Parent website, asking him to relate a few things about his beliefs and what they've done for him. Here was his response.
ScientologyParent - Mar 30, 2016