Mother of Three Reflects on the Secret of Her Success

A Scientologist shares her story of coming to terms with a rough childhood and overcoming her doubts and fears about being a mother and raising kids. 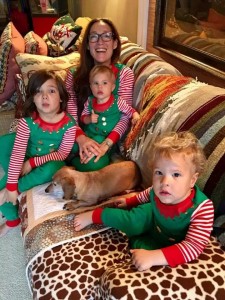 Alexandria, Virginia, December 24, 2016 (Newswire.com) - “I would not have a family of my own had I not found Scientology” says a stay-at-home mother of three, interviewed on the Scientology Parent website.

Renee describes the fear connected with marriage and having a family of her own.

“Owing to everything I’d seen and experienced growing up, I had felt that families and society in general were ‘messed up’ when it came to raising kids. I was utterly terrified to have kids, but I simultaneously wanted a husband and kids so badly.  So I never thought I could have a family or be a good mom.”

Finding Scientology at 30, one of the first things she discovered was the source of her poor relationship with her father, which had made her own childhood so unhappy.

“I was lucky I had the chance to mend that relationship with my dad,” she says, “because my dad passed away about 11 years later. It bought me that time with him. And I’m so thankful for that.”

She describes how her Scientology studies and spiritual counseling helped her become more responsible for the relationship with her dad. “You discover for yourself you aren’t just a victim of other people’s actions,” she says. “You gain more and more responsibility for yourself and, in turn, those around you....I was able to see him and his good points, and was finally able to look past the bad. I could love him for who he was, even though he would, at times, still say silly things—it just didn’t bother me anymore.  I was happy finally to be that person who didn’t blame him for his shortcomings. Nor did I take the things he said personally anymore.”

And she says that these conflicts with her father, unresolved, “pretty much had halted my growth as a being.”

With her own childhood no longer an issue, she was able to consider the possibility of having a family of her own. “I began to see that I too could have kids and a family that wasn’t all messed up,” she says.

“I currently live in Northern Virginia with my husband and kids—a five-year-old son and boy and girl twins who are 2 1/2 now.  And I just turned fifty in October,” she says.

Scientologist Tells Us What Is Scientology?
A writer recently approached Tad Reeves, who runs the Scientology Parent website, asking him to relate a few things about his beliefs and what they've done for him. Here was his response.
ScientologyParent - Mar 30, 2016