The NAMA Show took place in New Orleans during Aug. 18-20, 2021. The team of SandStar North America attended the show with the company's AI vending machine and unmanned store solutions, which are smart retail solutions with the most promising future for commercial applications. Many leading retailers, including PepsiCo, Nestlé, and Starbucks, also came to the show. 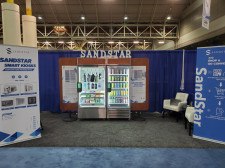 CHARLOTTE, N.C., August 25, 2021 (Newswire.com) - The NAMA Show is a top annual event of the automatic merchandising, unmanned retail and food service industries. NAMA stands for the National Automatic Merchandising Association. Founded in 1936, NAMA is the association representing the $31 billion U.S. convenience services industry. Its member companies include many of the world's most recognized retail brands and their suppliers.

At this year's event, SandStar introduced its AI vending machine and unmanned store solutions to all the visitors. Both products adopt the leading "dynamic computer vision technology" to provide a convenient "grab and go" shopping experience for consumers. Furthermore, they can also collect complete data in retail settings and visually analyze them to make optimization recommendations for smart product selection, smart display, smart pricing, and so on, to help conventional merchants digitally transform retail, reduce costs and increase efficiency.

Since the outbreak of the COVID-19 pandemic, the demand for contactless shopping has grown dramatically overseas. According to a recent market research report from the United States, the size of the global automatic merchandising market will reach $29 billion (about RMB 200 billion) by 2024, and according to data from the Reuters, the market of unmanned grocery stores may grow to $50 billion in the future.

Due to the growing demand for senseless payment and unmanned retail in the marketplace, SandStar, which was the earliest to enter this industry, has established partnerships with many retailers.

In February this year, SandStar's smart vending machines were officially put into operation at the Charlotte Douglas International Airport in the United States. Taking advantage of the airport's foot traffic, the vending machines provide a "3-second" fast shopping experience to attract travelers who are in a hurry. HMSHost, which is a customer of SandStar and also a leading airport retailer, is still surprised at the average daily sales of the project today. In April this year, a smart vending machine of SandStar selling the Wall's ice creams was launched in London through a partnership with Unilever to become the first pure vision smart vending machine in the UK. The same ice cream vending machines were also deployed in other settings later, including the office of Unilever's Dutch headquarters as well as the office buildings of its partner companies.

In the second half of this year, the deployment of a pure vision unmanned store project of SandStar and another top beverage supplier, which has been two years in the making, will also be eventually completed, and several unmanned stores will be launched at the same time in Dubai.

The year 2021 is a year that sees the fast deployment of SandStar's projects and the demonstration of its promising future as a business. It can be predicted that, with the pandemic gradually becoming business as usual globally, contactless shopping will increasingly become the mainstream for retail in the future. SandStar, which has been working in the field of unmanned retail for five years, will continue to spend on R&D and take advantage of the special opportunities at the moment to accelerate its global expansion and embrace the best times for unmanned retail together with many other innovative tech companies.

SandStar has received four rounds of investments from recognized investors, including Thailand's Charoen Pokphand Group (CP), which is one of the largest business conglomerates in the world. For more information, visit www.sandstar.com.

Why People Tend to Buy More Than One Product When Shopping on a Smart Vending Machine
- Jul 31, 2021
Newswire