Richard DeNapoli won more than 50% of the vote in a landslide in the August 30th Election, becoming the newly elected Broward Republican Party State Committeeman. He will be serving for four years. 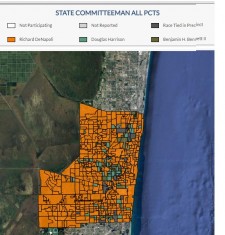 DeNapoli was endorsed by Representative George Moraitis: “I am proud to endorse Richard DeNapoli for State Committeeman. Richard did an outstanding job in his service as the Chairman of the Broward Republican Executive Committee and he consistently works hard to promote conservative values and Republican candidates.”

"Friends, my name is Rico Petrocelli, your current Broward State Committeeman, former Broward Republican Party Chairman & Executive Director. I am here to explain why I am supporting my friend Richard DeNapoli, the MOST qualified man for the State Committeeman position. My dad always taught me there is 'No substitute" for experience, and Richard has what it takes to be an excellent State Committeeman, and represent all of Broward's Republicans again.....

I have known Richard for many years, as a friend, family man, husband and father of two boys. He has been a successful Chairman of our Broward Party, was appointed by the Governor to the Florida Real Estate Commission, and as our next State Committeeman, already has the contacts statewide to ensure Broward is well represented.

Richard DeNapoli has the experience to lead Broward again, and there is NOBODY else you should consider to Vote for for State Committeeman. Vote DeNapoli!"

In addition to his practice of law, Attorney DeNapoli is a Certified Financial Planner® and holds licenses as a Florida Real Estate Broker and Mortgage Broker.

Richard DeNapoli has over 14 years of experience in law and trust services. He is a native of Hollywood, Florida, and a graduate of the University of Miami School of Law (2008, LL.M., Estate Planning), Fordham Law School (2002, J.D.) and New York University (1999, B.A., Politics; B.A. Italian).