R. J. Donnelly's New Book 'Voices: A True Story' is a Riveting Story of Life and Death Struggles, Which Lead to Redemption and a Miraculous Journey of Faith

Recent release "Voices: Tormented to Life; A True Story" from Covenant Books author R. J. Donnelly is the record of two people's tortured lives, of the spiritual and moral bankruptcy of their world views, and of how God, who in His love, pursued them more fiercely than their enemies. 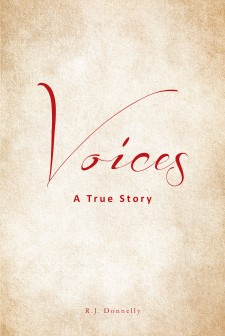 NEW YORK, February 17, 2020 (Newswire.com) - R. J. Donnelly, a full-time speaker and author, has completed his new book, “Voices: Tormented to Life; A True Story”: the evocative, real-life account of Bob and Sue, two people lost to life, lost to purpose—aimlessly adrift in the universe. It tells of their enemies, of their fiery relationship, of the God that interrupted, healed, and established them on the foundation He laid ... Truth.

R. J. shares, “’Voices’ tells of a world where lives are adrift in a sea of flames. Such an atmosphere of dancing human remains may be hard to imagine unless it’s been lived. Like firebrands streaking through a black night sky, spirit things can seem a fantasy to a casual eye. As for the telling’s in this book, they’re not a glimpse but a deep gaze—and the encounters of a human soul.

"Born far apart, Sue and Bob’s lives began as fairytales, but as fairytales will do, their dreams bled out and soaked the ground! Broken homes, drugs, alcohol, and a confused moral compass led them down treacherous paths. Then in 1973, while drifting through the universe, their twisting paths collided one day in the dark. Bob was a violent atheist who professed he was God. Sue, who once aspired to be a nun, now dabbled in mysticism in her thirst for truth.

"1976 brought the valiant ones whose vigil laid siege to our ramshackle kingdom for four months. Two months in, Sue prayed through the night...and when I learned of it, I threatened her life! God then showed her in a dream, my soul completely void of light; and as she watched, giant soulless birds began devouring me. Two weeks later and close to death, alone in my room, I too prayed, wanting a new life—and when I asked for forgiveness, a voice above me spoke—ending the days of my dying: for in that moment the days of miracles had begun.

This is a true story.”

This book steeps with mysteries and events that Bob and Sue personally walked through. Ultimately, they were given new lives: filled with peace, love for each other, and the abiding presence of Adonai Himself—who then told Bob, “Now go tell others that what I’ve done for you, I can do for them as well.”

Readers can purchase “Voices: Tormented to Life; A True Story” at bookstores everywhere or online at the Apple iTunes Store, Amazon, or Barnes & Noble.

Giles J. Isaacson's New Book 'The Blessings of a Tentmaker' Holds Several Fascinating Tales That Inspire Faith and Move Hearts
Recent release 'The Blessings of a Tentmaker' from Covenant Books author Giles J. Isaacson is a captivating collection of family stories filled with values and a reminder of our personal responsibility to our faith in God.
Covenant Books - Jul 2, 2020