The latest release of the iSkysoft Toolbox - Unlock (iOS) allows its users to remove the lock screen on an iPhone easily. It can get rid of all kinds of PINs, Face ID, and Touch ID by following a stepwise approach. No prior technical knowledge is needed to remove a screen lock on an iPhone or iPad using this sophisticated tool. 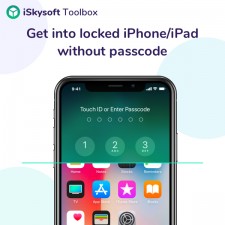 HONG KONG, December 29, 2018 (Newswire.com) - In order to make it easier for iOS users to remove the lock screen of their device, the iSkysoft Toolbox has come up with a dedicated tool. The Unlock iOS application has been recently released and is already being trusted by several users. By following a simple stepwise approach, users can remove the existing lock on their iOS device. The application is a part of the iSkysoft Toolbox that caters to all kinds of utility products for iOS and Android.

During the screen removal process, no additional harm is done on the device. Users simply need to provide some crucial details related to their device and follow the on-screen instructions. In the end, their device would be restarted with factory settings and no lock screen. To use iSkysoft Toolbox – Unlock (iOS), no jailbreaking or unwanted hassle is needed. Here are some of its major features:

Just like the other applications of iSkysoft Toolbox, the Unlock iOS tool is also fully compatible with leading iOS devices. This includes all the devices running on iOS 9.0 and later versions. It also supports the latest devices running on iOS 12 like iPhone XR, XS Max, XS, X, etc. The desktop application runs on major Windows and Mac versions. As of now, it supports macOS 10.6 and newer versions as well as Windows XP, Vista, 7, 8, 8.1, and 10.

How does it work?

Any user can remove the existing lock screen on their device by using iSkysoft Toolbox – Unlock (iOS). Connect the locked iOS device to the system and launch the application. Users are required to enter some basic details related to their phone. Later, they can follow the on-screen instructions to remove the lock screen on the connected device. In the end, their iOS device would be restarted with updated firmware and no screen lock.

The one-year license of the product can be bought for $59.95 whereas the lifetime license comes at a cost of $69.95. Though, the entire iSkysoft Toolbox can be bought for only $99.95. All the products have a 7-day money back guarantee and come with dedicated customer support. There is also a free trial version available for the product as well.

With a vision to provide cutting-edge and resourceful software to its users, iSkysoft was launched in 2007. It started with developing desktop applications of different kinds and gradually released various utility programs as well. As of now, it has a leading presence in over 230 countries and is relied upon by millions of users. The iSkysoft Toolbox is the latest product of the brand that aims to provide simple and quick solutions related to Android and iOS devices.

iSkysoft Data Recovery 5.0 Officially Released: Advanced Features and Improved Recovery Rate
Recently, iSkysoft has released an advanced and improved version of its flagship data recovery tool - iSkysoft Data Recovery 5.0. Now, the tool has a far better interface and provides quick results under all kinds of scenarios. With the latest update, the company is sure to expand its reach in the expanding data recovery industry.
iSkysoft - Jun 22, 2019