It's a moment of joy for the internet users as the much-awaited OneVPN Android app finally hits the market, for FREE. 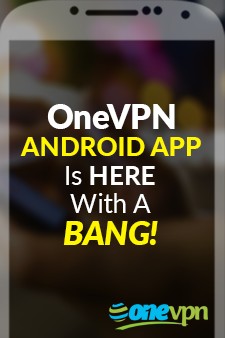 Wan Chai, Hong Kong, August 3, 2016 (Newswire.com) - OneVPN is speeding up its journey to become number one in the VPN industry by introducing its Android App. It is not going to be an easy task but with the kind of speed OneVPN is launching new features and Apps, the VPN provider shows a lot of potential to succeed in the saturated market.

The Android App for OneVPN is now available at Google Play Store for users to download. Users having Android phones can now connect easily to the app and enjoy a vast network of VPN servers with a few taps.

"Introducing the OneVPN's Android App is just the first step, Apps for all the other major platforms are also on their way. OneVPN Apps will make every VPN users' experience smoother and safer."

Some of the many unique features of OneVPN’s Android App

OneVPN is offering numerous features through its Android App along with its unique features including Ad-blocker, Anti-malware, and NAT firewall. Every feature has its own specification.

The Ad-blocker: OneVPN’s Ad-blocker is a great addition for people who want to avoid seeing ads while streaming movies and other content.

Anti-malware: The anti-malware is a great help for people who are looking forward to good protection against cybercrime and other malicious activities.

The world is given a chance to see OneVPN’s true potential, and while it’s just the beginning, there is a lot more that is expected from this rising VPN service. While discussing the launch of OneVPN’s Android App, Farooq Asad, the CTO at OneVPN stated;

“Introducing the OneVPN’s Android App is just the first step, Apps for all the other major platforms are also on their way. OneVPN Apps will make every VPN users’ experience smoother and safer.”

To see the walk-through on how to configure and use OneVPN Android App, you can visit onevpn.com/blog.

About OneVPN: OneVPN is a fairly new but most competitive VPN service that provides privacy, security, and freedom via different FREE tools such as NAT Firewall, WEB TV, Anti-Malware, Ad-Blocker. For more information, visit OneVPN.com.

OneVPN Deploys 5 New Servers to Its Global VPN Network
OneVPN is geared up to fight and prove its name in the VPN industry with 5 new powerful servers in the most demanded countries.
Unravel Technologies - Aug 1, 2016