OneVPN is geared up to fight and prove its name in the VPN industry with 5 new powerful servers in the most demanded countries. 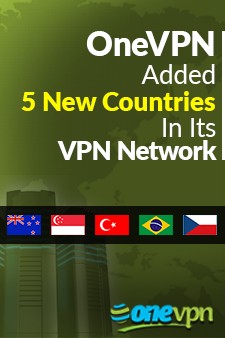 Wan Chai, Hong Kong, August 1, 2016 (Newswire.com) - OneVPN takes the fast lane and moves ahead with continuous improvements and additions to meet the customer needs, as well as to beat the VPN giants in the industry. This brings in new opportunities for people to explore the service which has been rapidly moving forward in the industry.

The newly installed five servers are an exciting addition for the users who have demanded some specific servers to be added for more surfing options.

Farooq Asad, The CTO at OneVPN, was excited to share with us the news of newly deployed servers. He stated;

“This was a decision to fulfill our customers’ demand and to satisfy their need for more servers. It was important as it would enable them to browsing and stream more content from around the world. It was a healthy decision which would indeed show our potential and strength in the market”.

This shows the intensity of commitment to become the best in the market by fulfilling online customer needs. Benefits of recently added servers will include privacy and security via more dynamic IPs, access to the content from more countries and so on. The server details can be checked out on the official OneVPN Servers Locations page too.

OneVPN's Most Anticipated Android App Hits the Market
It's a moment of joy for the internet users as the much-awaited OneVPN Android app finally hits the market, for FREE.
Unravel Technologies - Aug 3, 2016
Newswire