As Americans reflect on yesterday's celebration of our nation's independence, it is hard to believe that in this day and age some of our war veterans have never been given a proper burial. Unclaimed and abandoned, their cremains have been left in basements or garages or on a shelf in a funeral home. Thanks to one organization, the cremated remains of these soldiers have finally been laid to rest with full military honors. 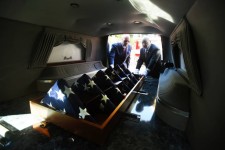 Waldwick, NJ, July 5, 2016 (Newswire.com) - They are gone, but at last they are not forgotten. The cremains of six war veterans were buried with full military honors on Thursday, June 30 at the Brigadier General William C. Doyle Memorial Cemetery. A fitting resting place for the men who served in our Armed Forces, except that there were no families or loved ones present. The remains of these six men have been unclaimed and abandoned for decades in New Jersey.

Their remains would be simply stored away on a shelf if not for the dedicated work of New Jersey’s Mission of Honor for Cremains of American Veterans, a non-profit organization that locates, identifies and inters the unclaimed cremated remains of service members. Thursday was the 24th Mission of Honor burial ceremony, having previously buried 203 unclaimed veterans, while reuniting another 272 soldiers with their families.

“We learned about this organization only a month ago,” says Stephen Kopshaw, a firefighter with the Wyckoff Fire Department and owner of a FIT36® studio in Waldwick, N.J. and a Fitness Together® studio in Wyckoff, N.J. “Two members of our fire station also manage a funeral home and they came to us asking for help with our power ladder to hang a flag at the Home. When we found out what they were doing, we all wanted to do more to help.”

Kopshaw not only helped at the burial, he was part of the 21-gun salute squad honoring: Thomas English, Jr., James Walls and Richard Mower, who fought in World War II; Leroy Thomas, Jr. and William Ellis in Vietnam; and Robert Sinn in Korea.

“It was a humbling, once in a lifetime experience,” added Kopshaw. “It’s sad to think of anyone abandoned with no family left to take care of you at the end of life. That these are war veterans moved me even more.”

Kopshaw says Mission of Honor is an organization with an amazing group of people, who need the help of others to continue their mission. Donations are necessary to provide proper burials for abandoned and unclaimed veterans.

“Anyone who serves our country does not deserve to remain in a box on a shelf in a basement. It’s just not right,” Kopshaw stated. “Whether these veterans have family or not, it should be the mission of every American, who these heroes fought so hard to protect, to provide them a proper resting place.”

HIIT the Slopes Fit and Pain-Free
FIT36 has Five HIIT Exercises to Prepare You for the Ski and Snowboarding Season
FIT36 - Dec 19, 2016
Elite Athletes Use FIT36® to Improve Performance and Prevent Injury
Functional HIIT workout helps athletes train for what they love.
FIT36 - Nov 14, 2016

"King of OCR" Reveals How He Trains to Be the World's Toughest Mudder
What does it take to be the toughest "Mudder" in the world? Three-time champion Ryan Atkins shares his regimen for preparing for the most grueling obstacle races and the motivations that keep him at the top of his game.
FIT36 - Sep 21, 2016
Newswire