HIIT the Slopes Fit and Pain-Free 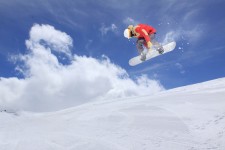 Highlands Ranch, CO, December 19, 2016 (Newswire.com) - That first day on the slopes can be a killer for most of us who haven’t used certain muscles required for snowboarding or skiing for about six months. Still, most of us will head to the mountains this year with little or no preparation to spend six or more hours putting our bodies through rigorous pain and strain.

Brian Vandemoortele is an exercise training design expert with an M.S. in Exercise Science.  He is also a programming design consultant for FIT36®, a fitness studio concept that offers a revolutionary full-body workout in 36 minutes. FIT36 incorporates high intensity interval training (HIIT) to help people be better at what they love to do in life, including snowboarding and skiing. Together, they know that with the right preparation, proper stretching and a varied exercise program, anyone can become snow prepared.

A HIIT workout can not only elevate your level of fitness for the skiing season, it can help eliminate soreness.

Vandemoortele and the personal trainers at FIT36 have put together five HIIT exercises that can not only elevate a person’s level of fitness for the skiing season, but also help eliminate soreness.

Kettle Bell Squats with Rotational Press: This is a strength movement. Start in standing position with legs in a wide stance. Holding a kettle bell in one hand at shoulder level and lower into squat stance with your back straight and your chest and eyes facing forward. As you come up out of the squat rotate 90 degrees away from your side holding the kettle bell, while simultaneously pressing the kettle bell in that same direction.

BOSU Squat Pulse: This is a balance and endurance exercise. Start by placing the BOSU round side down. Stand with both feet on the BOSU and squat into a 90-degree squat position. Pulse up and down (6 inches of movement) while maintaining good squat form.

Monster Walk w/bands:  Also a strength movement, stand on top of an elastic band with feet shoulder width apart. Pick up both handles and cross them (right handle to left hand, left handle to right hand). Keep the band tight by pulling up on the handles. With a slight bend in your knees take side steps to the right and to left while controlling the resistance and keeping tension on the band. Do not let the resistance control the movement. In other words, force your feet apart during the movement.

Lateral Box Jumps: This is an athletic and endurance movement. Stand in the middle of two, low boxes with your feet slightly apart. With an explosive movement, jump laterally up to one box. After landing, quickly jump back to the middle and repeat the same thing with the other box.

BOSU Squat Hold Side to Side Movements: This is a balance and endurance exercise. Start by placing the BOSU round side down. Stand with both feet on the BOSU and squat into a 90-degree squat position and hold this position during the entire exercise. From this position, drive the BOSU to one side, back to the middle and then to the other side and repeat. Your upper body and core should remain stable during this exercise.

With FIT36, many of the workouts are focused on time versus the number of reps completed. This allows individuals to complete its workouts no matter what fitness level they are at. As an example, using the five exercises highlighted above, this is how FIT36 would structure a workout.  Complete as many Kettle Bell Squats with Rotational Press as possible for one minute, followed by 30 seconds of rest.  Use this rest to get ready for BOSU Squat Pulses for one minute, as many reps as possible, followed by 30 seconds of rest. Progress through all five exercises, using the same pattern with 30 seconds of rest in between each exercise.  As soon as all five exercises have been completed, start back at the beginning.  Go through these five exercises as many times as possible, whether you have 20 minutes or 60 minutes to workout.

This is a great illustration of how training is done at a FIT36 class. Members go through 12 circuits, twice, working hard at each circuit for one minute, followed by 30 seconds of rest before moving on the next circuit, for a total of 36 minutes.

FIT36, LLC began franchising in 2014. It’s franchisor is WellBiz Brands. Each FIT36 studio is independently owned and operated with four studios in Colorado, two studios in Virginia, one studio in New Jersey, and a newly-opened studio in California. To learn more about the concept and franchising opportunities, visit fit36fitness.com.

"King of OCR" Reveals How He Trains to Be the World's Toughest Mudder
What does it take to be the toughest "Mudder" in the world? Three-time champion Ryan Atkins shares his regimen for preparing for the most grueling obstacle races and the motivations that keep him at the top of his game.
FIT36 - Sep 21, 2016