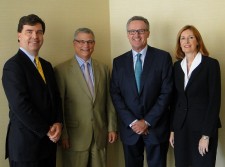 NEW HAVEN, Conn., August 16, 2017 (Newswire.com) - Attorneys Michael D. Neubert, Deborah Monteith Neubert, Douglas S. Skalka, and Andrew R. Lubin, principals with the law firm of Neubert, Pepe & Monteith, P.C. have been selected by their peers for inclusion in The Best Lawyers in America 2018, the oldest and most highly-respected peer-reviewed guide to excellence in the legal profession.

Michael Neubert has extensive experience in the areas of hospital and medical liability defense, civil and commercial litigation, professional liability defense, and litigation and appeals. His clients include hospitals, physicians, medical practice groups, lawyers, and professional associations. He also represents insurance companies, corporations, and municipalities. Attorney Neubert has been listed in Connecticut Super Lawyers since 2007, and was named Best Lawyers 2016 Medical Malpractice Law-Defendants “Lawyer of the Year” in New Haven.

Doug Skalka is an experienced attorney in all aspects of bankruptcy, commercial finance and business reorganization matters. He represents secured and unsecured creditors, debtors, commercial lenders, investors, purchasers and committees in bankruptcy and business reorganization cases. Attorney Skalka holds a certification in business bankruptcy from the American Board of Certification. He has been named in Best Lawyers since 2006, in Connecticut Super Lawyers since 2007, and selected to the Top 50 Connecticut Super Lawyers list since 2014.

Andy Lubin is an experienced real estate, commercial finance, and commercial and business law attorney. He assists clients in all aspects of acquisition, financing, leasing, management, restructuring and disposition of retail, residential, office and industrial properties. Attorney Lubin has also developed a subspecialty in closing both SBA 7a and 504 Loans and has received a “Designated Attorney” certification from the U.S. Small Business Administration. Attorney Lubin has been listed in Best Lawyers since 2001, named the Best Lawyers 2014 and 2017 Real Estate “Lawyer of the Year” in New Haven, and has been listed in Connecticut Super Lawyers since its inception.

Since it was first published in 1983, Best Lawyers has become universally regarded as the definitive guide to legal excellence. Corporate Counsel magazine has called Best Lawyers “the most respected referral list of attorneys in practice.”