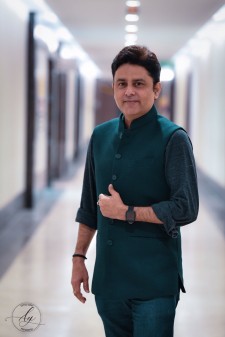 MUMBAI, India, June 10, 2020 (Newswire.com) - Globally renowned celebrity astrologer, and a multifaceted personality, Dr. Sundeep Kochar has been honored with the 2020 prestigious Three Best Rated® Award. With over two decades of experience in Astrology, Sundeep has been a recipient of several national and international awards and recognition throughout his career. He feels honored to be a recipient of the prestigious Three Best Rated award. He is well-known for his appearance on several television shows, one of which has fetched him the honor of getting into the Limca book of records for hosting the longest-running astrology show on television.

Sundeep says, "I feel I am the chosen one." His interest and inclination towards astrology started since his childhood. He always wanted to help people in some way, to influence and drive them in the right path. Astrology helped him a lot in doing so. His fascination with the movement of stars and their influence on human life and his interest in astronomy made him an astrologer with rational thoughts. Sundeep's predictions have helped numerous people to reach greater heights in their life. He has evolved into a motivational speaker and a life coach.

Apart from traditional astrology and horoscope, Sundeep is also a Vastu consultant. He incorporates face reading and hand reading techniques as a part of his holistic approach while engaging in predictions. He is privileged to empower people and make them realize their strengths and weaknesses with the help of astrology. As an astrologer, Sundeep’s approach is more holistic, scientific & practical.​

Amongst his famous predictions, he is the only Indian astrologer who predicted about Donald Trump becoming President of the United States of America and Narendra Modi coming back to power for a second term as Indian Prime Minister. He has also predicted the global recession of 2020-2021 one and a half years back. He has an excellent track record of making a difference in the lives of the people who sought his advice for the welfare of their life. Dr. Sundeep Kochar has global acclamation for his achievements as an astrologer. He is India’s most trusted astrologer. Sundeep offers face-to-face, phone, and Skype consultations. He has been rendering his services in Mumbai and all around the world by all means.