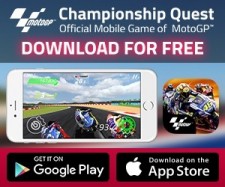 Melbourne, Australia , October 21, 2016 (Newswire.com) - Dorna Sports, the rights holder of MotoGP is discovering the power of mobile devices as the official MotoGP Racing App crossed a key milestone of half a million daily races by fans of the sport and will generate over 15 million races in October and 1.8 million hours of 'second screen' time.

Available on the Apple AppStore and Google Play, MotoGP Championship Quest is the first free to play mobile App developed around MotoGP. It's widespread availability is giving the sport a boost in fan engagement, especially in markets where motorcycles are more than entertainment but a way of daily life. In Indonesia, the App is one of the most downloaded games in the App Stores and throughout Europe where scooters and motorcycles are the commuters choice, the App has garnered millions of users.

Mobile screens have changed the way people consume and engage with content, brands and sports. The MotoGP Racing App is a really cool way for fans to interact with the sport they love and the Fan World Championship is a very real way in which they can make a personal contribution to their favorite rider.

Graeme Warring, co-founder of WePlay Media, the developer of the App said, “The time commitment fans of MotoGP invest in the App is incredible, we are seeing around 63,000 hours of game play per day and the numbers are continually rising. It speaks volumes about the popularity of the sport and the success of the ‘MotoGP Fan World Championship’ which is the eSports series of MotoGP.”

The Fan World Championship is a weekly race series where the MotoGP rider who has the highest average fan score wins that round of the series. If it were a popularity contest Valentino Rossi would win hands down, but the Fan World Championship is more about the fans time and effort commitment to supporting their favorite rider regardless if there is 1,000 of them or a million. The riders success in the series is directly dependent on the efforts of their fans.

The popularity of the App has also been a win for the sponsors of the teams and Grand Prix series. In the third quarter Engagement Report, brands such as Tissot, Michelin and Brembo have seen hundreds of millions of "brand impressions", a key metric used to value effectiveness of sponsorship in sports. Warring said "We approached the development of the App to be an extension of the Television experience, whether people play it for a few minutes on the bus or chilling out at home. The fact that the fans are seeing high quality graphics of a race on a screen is very much in line with traditional sports media."

As the 2016 MotoGP season draws to a close with the fly away races in Japan, Australia and Malaysia followed by the final race in Valencia, Spain, the MotoGP Racing App is also a key component in the strategy to extend the season.  The MotoGP Fan World Championship runs until the last day of 2016 before starting again January 1 for the 2017 season. This gives fans the opportunity to race and win cool prizes including a magnificent Brembo Fan World Championship trophy, flights and passes to races, and limited edition Tissot watches and X-Lite helmets, amongst other things.

“MotoGP is the only sports series which has approached the fan engagement in such a serious way. It really is an outstanding series for the fans and presents them with a way to make a meaningful and noticeable contribution to their favorite riders. The simple convenience of a smart phone App opens up participation to the masses in every corner of the world,” Said Warring.

Dorna Sports is an international sports management, marketing and media company, founded in 1988. The organization has its headquarters in Madrid, and further branch offices in Barcelona, London and Tokyo. Dorna has been the exclusive commercial and television rights holder for the FIM MotoGP World Championship since 1992. With more than 60 years of history MotoGP™ is the pinnacle of motorcycle racing. Dorna has an all-encompassing Grand Prix event management philosophy, with 360º direct involvement in all areas of the MotoGP™ World Championship. Dorna has additional involvement in further motorcycling events, such as the World Superbike Series, FIM CEV Repsol, the Asia Talent Cup and the Red Bull MotoGP Rookies Cup, which seeks to promote the development of the next generation of riding talent. Visit www.motogp.com and www.dorna.com

WePlay.Media was founded by 20-year video game veteran Mark De Simone and his partner Graeme Warring to bring to market AAA quality experiences and content to mobile. While games are often what the company produces, it sees itself as a media enterprise, producing content for the mobile audience who spend more time looking at their mobile devices than they do the television. The company has produced mobile apps for major international sports franchises, Hollywood movie studios and syndicated television producers. It is based in Phoenix Arizona and has offices in Manila, Philippines and Shanghai, China. Visit www.weplay.media