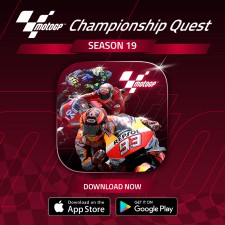 BARCELONA, Spain, March 6, 2020 (Newswire.com) - ​​Marc Marquez, the 8 times World Champion has added another world title to his accolades, the 2019 MotoGP Fan World Champion. Represented by fan Feri Kurniawan of South Sumatra Indonesia, whose sustained effort throughout the season and 1.927 billion point score in the game dominated and pushed Marquez over the line to victory. Feri’s held off an impressive battle from rivals Valentino Rossi with 1.909 and Cal Crutchlow with 1.900 who placed second and third respectively.

The 2019 MotoGP Fan World Championship season saw the MotoGP Mobile game flood the top of the mobile gaming charts in several European countries including Spain, Italy and Indonesia. Over 30,000,000 fans downloaded the game and competed in millions of races daily. This is the first “free to play” app released based on the World Championship series MotoGP and the global popularity of the sport continues to see a consistent growth in the fan engagement dynamic.

Taking the second step on the podium was Mohammed Bilal of Tamil Nadu India, representing Valentino Rossi aboard the Monster Energy Racing Team bike. He is the first Indian fan to take a podium in the MotoGP Fan World Championship where the app has garnered millions of users and fans of the sport.

Already ahead of the field in the 2020 Fan World Championship season, Bilal says, “Every week the competition is becoming very strong. . .  guys are giving tough challenges. We expect to break many records!” in a comment he put forth on “The Final Off-Season Test | Round 3/26” which premiered on the MotoGP Championship Quest YouTube, Sunday, Feb. 23.

Yunita Rahma of Jakarta Timur, Indonesia, took the third step for the second time in Fan World Championship history, this time around aboard the LRC Honda representing the #35 Cal Crutchlow, the first Brit to win a premier class race since Barry Sheene.

Graeme Warring of WePlay Media who developed the app and hosts the MotoGP Fan World Championship said, “We want to congratulate the winners and all the millions of other fans who competed in the 2019 season and we would especially like to thank the sponsors, Brembo, Tissot, Nolan and Michelin who continue to support not only the sport but the fans in the paddock.” The 2020 MotoGP Fan World Championship is already underway ahead of the season’s first race in Qatar which was unfortunately canceled due to the coronavirus travel restrictions.

The game is free to play and available in the Google Play and iTunes AppStore, it is available in 16 localized languages. The 2020 season update is scheduled for release at the end of May 2020.