Developers often sabotage their product by advertising it to the wrong audience. In order to establish long-term clientele, app developers must prioritize mobile app experts over marketers

NEW YORK, United States of America, November 10, 2017 (Newswire.com) - Humans are an innately curious species, a race that will never stop innovating. These innovations are in a neck and neck competition for the consumer’s time and money. Unless the consumer is convinced that the service fills a void in one’s life, the product, no matter how amazing, won’t make the cut. Today, selling an idea, a vision needs just as much attention as the product. Apple, for example, may have the same services as its competitors yet what makes it “Apple” is the vision it sells to the world. It makes them care by integrating what people care about into its services. The app economy lives by the same rule. If app developers don’t know who cares about their services, the billions on marketing won’t reap any substantial results. In order to reach the right ears, developers need to sell their vision on the right platform.

What is the right platform for app developers? It is mobile app experts like Mobile App Daily which hold access to millions of daily app users, leading analysts, experts, and marketers in the app economy. For example, when Mobile App Daily covers a success story of an entrepreneur like Gillian Morris or the cybersecurity mastermind Vijay Balasubramaniyan, its global readership isn’t just introduced to the app the developer has created; it sells the vision they stand for, which then creates the marketing pipelines for the developer as other mobile app experts and marketers share this information with their readers. The magic isn’t limited to people but events.

Mobile App Daily helps developers establish a stronger foothold in the app economy by promoting events such as Google Developers Day and App Promotion Summit that not only keep its readers aware of trending ideas of the app leaders but also the innovations that deserve their time. The website offers a solution from the chaos of shrieking sales pitches, giving developers an illusion of effective marketing. Instead of constructing and adhering to the niche of mobile apps and covering success stories and events circling around the same, Mobile App Daily has become a marketing haven for app developers. 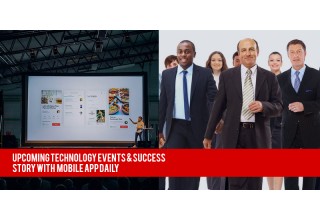 MobileAppDaily is a mobile app-centric news portal which covers all the latest breakthrough in the mobile app industry. We ensure swift delivery of any elementary to paramount advancement in mobile app world with our exhaustive analysis and views.

MobileAppDaily: How Crucial Are User Reviews for App Developers?
Mobile App Reviews, both positive and negative can augment your ASO to unprecedented heights only if you know these secrets.
MobileAppDaily - Nov 8, 2017

MobileAppDaily Offers a Marketing Mantra, App Developers Shouldn't Miss!
With thousands of apps launched every week, how can founders ensure that their app reviews reach the desired target audience? While there are various ways of marketing your app, one of the essentials, most people often miss out on is getting their app reviewed by experts. App reviews on Mobile App Daily - the Leading portal for Mobile App Trends and Innovation, offers this solution.
MobileAppDaily - Oct 13, 2017
Newswire