MMUK MAN to Run Makeup for Men Classes in 2016 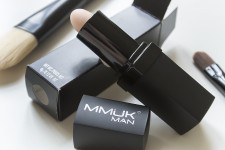 Brighton, April 14, 2016 (Newswire.com) - Leading on-line men’s makeup retailer MMUK MAN last night accounted that they will be leading male only cosmetic classes throughout the UK over the summer.  The announcement is further evidence of the growing demand for male specific makeup products, as thousands of men over the UK quickly come to realise how far just a little touch up can take them.

From dark circles, droopy eye bags and wrinkles, to scars, facial blemishes and spots, all of these common facial imperfections look set to be conquered by men, as 2016 marks the birth of the true modern man.  With over 50 makeup for men products in their collection, MMUK MAN look set to further cement their place as Britain’s number one male beauty care provider and with classes scheduled in Glasgow, Brighton, Newcastle, Birmingham and London expected to sell out very quickly!

Co-founder of MMUK MAN Alex Dalley last night said ‘We’re delighted to unveil the launch of MMUK MAN’s Makeup Classes and with the early numbers looking so promising, we can’t rule out these being a permanent fixture in our brand’s progression as the months and years go by’.

MMUK MAN’s first makeup class is expected be held on 26th May in London’s West-end will feature an entourage of model’s, makeup artists and products, allowing participants to get the ultimate hands-on male makeup experience they crave.  Providing help on how to make men’s makeup look natural and subtle, as well as featuring workshops on how to get the particular look gentlemen so crave, if you’re a man about town looking for a touch up from the grooming god’s, then this could well be your first port of call.