Successful British Based Men's Makeup Firm Expand Into the U.S. 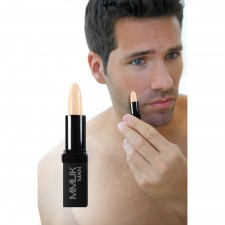 London, July 8, 2016 (Newswire.com) - 2016 has been an extraordinary year so far for British bases online men’s makeup company MMUK MAN.  With soaring sales, celebrity endorsements and an imminent BBC documentary on c-founder and young entrepreneur Alexander Dalley, the momentum doesn’t look as though it’s slowing down any time soon, as men across the world further continue their cosmetic education.  Now, to add to the whirlwind adventure, MMUK MAN announced last night that it has teamed up with Differio.com, based in New York City, to sell their exclusive men’s makeup products, both online in the U.S and in their exclusive New York based store.

‘The popularity of men’s cosmetics is clearly on the rise’ Alex said at the brands exclusive summer event in London yesterday.  ‘With the growing demand by American gentlemen for our products, it was only a matter of time before we made our products available both online and in a major city store in the U.S.  Differio.com were a clear winner in my eyes, thanks to their edgy and fresh approach to men’s style, grooming and lifestyle.’

MMUK MAN are rumored to launch in a male grooming shop at the world famous Dubai Mall in August, with further store and salon partnerships here in the UK expected to be announced.  To meet growing demand, this successful firm also announced the moving to a state of the art facility in East Sussex in September, continuing their meteoric rise to the top of the grooming tree in an abundance of style.  With their men's cosmetic products also available at male grooming retailer MaleSkin.co.uk, 2016 looks set to be a pivotal year in this brand's development.

For now, keep your eyes peeled, as the rise of the mascara man continues, with more and more men learning how to ‘Blend It Like Beckham’.

Man Has a Collection of Over 500 Pocket Squares - Addicted?
Josh, 28, from Worthing England spends nearly £200 on pocket squares each month in order to look his best.
Dalleys Ltd - Jul 1, 2016
Newswire