The Ministry for Education and Employment and Learning Machine to develop a significant education technology pilot in Malta. 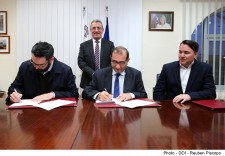 VALLETTA, MALTA, January 24, 2017 (Newswire.com) - The Ministry for Education and Employment (MEDE) has signed a Memorandum of Understanding with Learning Machine Group (LMG), a technology firm focused on delivering digital social infrastructure at a sovereign state scale. The MOU coincided with the conclusion of "The State of Digital Education: Engaging with Connected, Blended and Open Learning"—a conference held between 19 and 20 January as part of Malta's Presidency of the Council of the European Union.

The MOU signals the intention of both parties to develop and implement a Malta pilot of LMG’s nation-state technology platform, which is based on the Blockcerts open standard developed by LMG and the MIT Media Lab. Blockcerts is an open-source initiative that is OBI-compliant and sets out a common path for learner- and worker-owned official records. The LMG technology to be used in this pilot is built especially for academic credentialing and professional certifications and supports the creation, issuing, viewing, and verification of blockchain-based certificates. These digital certificates are registered on a public blockchain and cryptographically signed, and, as such, are tamper-proof and immediately useful when applying for employment, university or immigration.

We're very excited to be exploring a pilot of Blockcerts in Malta. This will be a first in Europe, and will empower both education institutions and learners in Malta to take control of education certification using state of the art technology.

"We're very excited to be exploring a pilot of Blockcerts in Malta. This will be a first in Europe, and will empower both education institutions and learners in Malta to take control of education certification using state of the art technology," said Joseph Caruana, Permanent Secretary at MEDE. The Ministry for Education and Employment is committed to continually improving the services it offers in keeping with its objective to provide present and future generations with the necessary skills and talents for citizenship and employability in the 21st century and beyond.

Proof of achievement and skill is a key enabler of this mission. Education is a primary resource because it creates a repertoire of skills and sophistication that leads to better economic opportunities and empowerment for individuals and communities. Verifiable proof of education is required to ensure that the benefits of learning are fully realised. Without proof, academic achievements can too easily be dismissed by others or simply melt away over time. With proof, each achievement becomes a source of pride and a building block for future accomplishments. Providing learners and workers with their official records provides the foothold for continued educational momentum, personal growth, and vocational success.

Chris Jagers, CEO of LMG, said: "Much like the internet, the blockchain is a decentralized network that creates a new paradigm for thinking about future social infrastructures. This innovation has particular relevance in the area of professional and academic certifications. The blockchain is an immutable ledger of transactions replicated across a global network. Historically, this ledger has been used to record financial transactions (who sent it, who received it, and how much was sent). This same infrastructure is now being used to record the conferring of achievements (academic degrees, professional training, licenses to practice, prizes, and the like) using the same general data structure (who issued it, who received it, and an encrypted record that is used for verification). The blockchain acts as a notary to record and later verify any professional or academic claim, without having to consult a centralized authority."

Blockcerts.org
LearningMachine.com
The Ministry for Education and Employment
The State of Digital Education: Engaging with Connected, Blended and Open Learning

Source: The Ministry for Education and Employment, Malta