Mervi Karsi-howard's New Book 'Israel, Jerusalem, And The Jewish People' Brings Forth Important Knowledge of Biblical Histories to Draw Believers to the Word 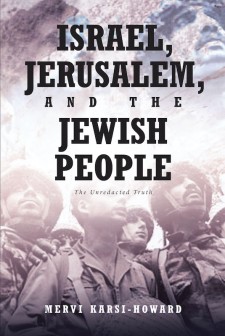 The State of Israel was accepted into the United Nations in 1949, yet the same organization has written 78 percent of its resolutions against Israel in addition to trying to change its history by denying the fact that Jerusalem was established as the capital of Israel by King David.

Israel has never started a war, yet it has had to constantly fight for its existence.

There are still thirty-six nations that do not recognize or have foreign relations with the State of Israel. Every country has had the freedom to choose its capital city, yet most countries refuse to recognize Jerusalem as Israel's capital and have their embassies in Tel Aviv.

Israel did not exist for nearly two thousand years, and yet it was born in a day after its dispersed citizens returned despite or maybe because of persecution and the Holocaust.

We are witnessing the greatest miracle of our time and one of the greatest fulfillments of Bible prophecy, but many are still asking what is meant by the miracle.

God's truth is without compromise, and the prophecies about Israel are the clearest and easiest to understand; however, many do not know them or, for some reason, get them wrong.

Israel is the litmus test for the believer, and this book will guide the seeker to deeper biblical understanding with an abridged but unredacted truth about Israel, Jerusalem, and the Jewish people. The recommended list of additional reading, in concert with the Bible, serves as a guide for those who want to know more."

Published by Covenant Books of Murrells Inlet, South Carolina, Mervi Karsi-Howard's new book is a brilliant encouragement for every single person to seek the truth in the pages of the Bible as it will lead them to a better understanding of the heart of God.

Readers can purchase "Israel, Jerusalem, and the Jewish People" at bookstores everywhere, or online at the Apple iTunes store, Amazon, or Barnes and Noble.

Regina Chandler Tolbert's New Book, 'Life Illuminated,' is a Brilliant Compilation of Stories of Light and Devotions From Her Personal Experiences
Recent release 'Life Illuminated' from Covenant Books author Regina Chandler Tolbert is a fascinating read across the thoughts and stories that Tolbert started to collect after getting diagnosed with stage IV cancer in 2016.
Covenant Books - Apr 23, 2021

Kyle Jekot's New Book 'A Cure for the Common Scam' Shares Great Ways to Outsmart the Schemes of Scammers All Over the Web
Recent release 'A Cure for The Common Scam' from Covenant Books author Kyle Jekot, C.F.E. is a knowledgeable manuscript that helps the user safeguard themselves and their possessions against the threat of scammers flooding the internet.
Covenant Books - Apr 22, 2021
Newswire