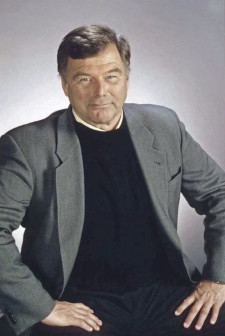 Called "the perfect broadcast voice" by the Boston Globe, Hersey has been a longtime household name in New England. Host of such classic programs as Ask the Manager, We Don't Knock, and The Movie Loft throughout the 1970s-1990s, Hersey has brought charm and plenty of laughs to thousands with his booming, resonant voice and trademark sweaters. Since 2016, Hersey has also been the voice of The Film Detective, bringing his expertise to the channel and narrating introductions for films from Cary Grant and Audrey Hepburn's Charade (1963) to the cult classic Carnival of Souls (1962).

An innovator of hosted television and reality programming, Dana Hersey is joined by The Film Detective's Don Stradley to discuss everything from the history The Movie Loft, to iconic Ask the Manager letters asking why so many Shemp episodes of The Three Stooges were featured, and the full inside scoop on local programming of the 1970s and 80s.

"Dana Hersey is a true broadcasting pioneer, celebrating one of the most illustrious careers the industry has ever seen," said Phil Hopkins, President of The Film Detective. "We are excited to partner with Dana and watch as his legacy continues into the future on The Film Detective."

The Film Detective is a leading distributor of restored classic programming, including feature films, television, foreign imports, and documentaries and is a division of Cinedigm. The Film Detective has distributed its extensive library of 3,000+ hours of film on DVD and Blu-ray and through leading broadcast and streaming platforms including TCM, NBC, EPIX, Amazon, MeTV, PBS, and more. The Film Detective has released its classic movie app on web, Android, iOS, Roku, Amazon Fire TV, and Apple TV and is available live with a 24/7 channel on Sling, STIRR, Plex, Local Now, Rakuten TV, and DistroTV. For more information, visit www.thefilmdetective.com.