Recent release 'The Austrian Heirloom' from Covenant Books author Mari Dekle is a bewitching story about a woman who finds herself in a grand adventure involving Austrian heirlooms of great significance. 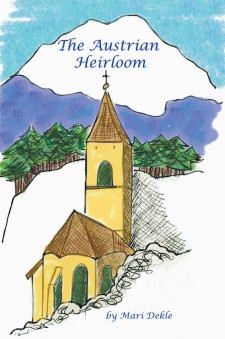 MOSES LAKE, Wash., September 1, 2020 (Newswire.com) - Mari Dekle, a loving wife and a passionate writer of short stories and poems from Moses Lake, Washington, has completed her new book “The Austrian Heirloom”: an enthralling opus that tells of a woman’s journey through culture and the outdoors after inheriting a ring said to be one of the great Austrian heirlooms.

Mari writes, “It was a ring on her finger like none other, but who would have known it would open the door to an adventure beyond her wildest dreams? The ring Liesel Stuart had inherited was rumored to be one of a set of four Austrian heirlooms. When a stranger who knew more than he let on came into her life, Liesel and her best friend, Jen Johnson, found themselves immersed in a culture far different and more fascinating than they had ever imagined. Then the treasured ring disappears…”

Published by Covenant Books of Murrells Inlet, South Carolina, Mari Dekle’s new book follows a woman’s breathtaking life that is mightily transformed when she receives a ring of Austrian descent and hides a value like no other.

This book will surely enthrall readers with thrill and fun as they embark with the characters in a journey that will bring wisdom and awe in their hearts and minds.

Readers can purchase “The Austrian Heirloom” at bookstores everywhere or online at the Apple iTunes store, Amazon, or Barnes and Noble.

W. N. K. Rad's New Book 'God Gave Me a Rainbow' Follows the Joyous Birthday of a Young Child Who Wishes for a Beautiful Rainbow on Her Special Day
Recent release 'God Gave Me a Rainbow' from Covenant Books author W. N. K. Rad brings a delightful tale about Kristen, a young girl who is about to celebrate her birthday, as she asks her parents for a rainbow and what happens is far from what the entire family expected.
Covenant Books - Mar 2, 2021

Josette Herrell's New Book 'Timmy's Big Adventure' Uncovers the Long-Awaited Adventure of Timmy as He Gets Himself a Fun Surprise Trip
Recent release "Timmy's Big Adventure" from Covenant Books author Josette Herrell brings a fantastic tale about a small brown trailer who dreamt of going on big adventures just like other trailers that all have different jobs to do. Will he be able to?
Covenant Books - Mar 2, 2021

Leona J. Howard's New Book 'Sink or Swim' Navigates One Into the Endless Complexities of Health Journeys
Recent release "Sink or Swim: Surviving the Odds by Design" from Covenant Books author Leona J. Howard is a closer perspective to the struggles that people all have to overcome while walking through their health journeys and even the journeys of others.
Covenant Books - Mar 2, 2021
Newswire