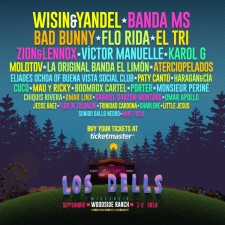 From Reggaeton to regional Mexican, from non-Latin rap to rhythm and blues, rock, salsa, soul trap, psychedelic cumbia, EDM to indie rock, the final line up of performing artists for the first and biggest multi-genre music festival in the Mid-West this year is as diverse as the Latin culture, musical expressions and flavor; just what the festival has always intended to showcase and feature since year one. It is the perfect end of summer vacation during the Labor Day long weekend.

More than 30 artists will join this year’s Los Dells Festival, including Puerto Rican reggaeton stars Wisin & Yandel, who parted ways amicably in 2013 after an extraordinary run with several #1 hits and international awards, including Grammy and Latin Grammy awards among an amazing amount of other nominations and awards. The top-selling reggaeton duo will headline the festival performing for the first time together in the Mid-West in more than six years.

Another festival headliner this year is Banda MS, the biggest Regional Mexican band today with impressive numbers (sales and streaming) and performances in sold-out arenas throughout the country. Finalist of the Billboard Latin Music Awards for the fifth year in a row this year, the band from Mazatlán Sinaloa is celebrating their 15th anniversary with an outstanding career that includes more than 50 nominations for diverse and prestigious awards and 25 wins.

The 3-stage festival takes place in the middle of the forest with full camping capacity (showers, restrooms, convenient store, security, bonfire), with the option to camp at the ‘Quiet Camp Zone’, with a wide array of resorts and hotel options in the area, and an option for on-site hotel with VIP packages. For those who can only attend one day of the festival this year, single-day tickets are now available for the low price of $79.00.

For Press Credential Submissions ENTER HERE to fill up the form