The Second Single Off Her Upcoming Album 'Alejandra Guzman: Live At The Roxy' 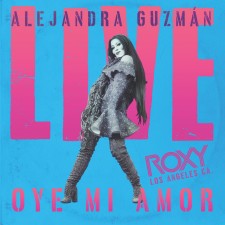 LOS ANGELES, July 12, 2019 (Newswire.com) - Mexico's most important and daring performer surprises us again with her newest single, a classic rock song in Spanish that has transcended more than one generation: "Oye Mi Amor" by Latin America's greatest rock-pop group, Maná.

"Oye mi Amor" is the second preview of Alejandra 's new material, which pays tribute to classic rock songs in Spanish and which were recorded live from the legendary Roxy in Los Angeles.

Commenting on the reason behind why she decided to record this song, Alejandra Guzmán mentions: "Oye Mi Amor is one of my favorite songs. I love Maná, and this is a tribute to their power, because for me, they have come a long way, and it's a song that has great strength and that makes people go crazy. They jump and start to sing and they know all the lyrics, and that's what rock and roll is all about: having fun, remembering those moments and those drunken times that nobody forgets."

"Alejandra Guzmá​n: Live At The Roxy" will be the 14th album of one of the most recognized voices in Latin America, and of the Mexican artist who, with more than 12 million albums sold, has conquered the heart of her public since her first album. La Guzmán (as she is known by the media) has a raspy voice and an unmatched energy and dedication on stage. Also known as "La Reina Del Rock," Alejandra Guzman, with this album recorded live and produced by producer and multiple Grammy winner Sebastian Krys and co-produced by Juan De Dios Martin, wanted to pay tribute to songs that have always accompanied her throughout her life and of which she has also been a fan of.

This new recording material that Alejandra Guzmán will be unveiling with the first singles will be followed by an international tour that has already been a great success in each of its first dates, which still has 13 upcoming presentations, including a performance at the spectacular Honda Center in Anaheim, California.