Local Brewery Learns to Not Mess with Minneapolis' Favorite Beer 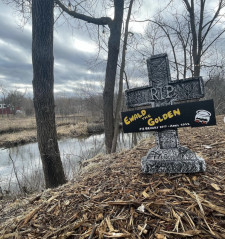 MINNEAPOLIS, June 1, 2022 (Newswire.com) - Most people love a good April Fools' joke. But when European-style brewery Utepils Brewing decided to play a little trick on its fans, things got personal.

On April 1, 2022, the brewery posted an "in remembrance of" message on its Instagram feed. The post let loyal patrons know Utepils was officially retiring its award-winning Ewald the Golden beer.

The post read: "Our award-winning Ewald the Golden Hefeweizen has reached retirement. It did its job of introducing Minnesota to the wonderful taste of an unfiltered traditional Bavarian wheat beer."

The message further revealed how Ewald's hipster brother, Ewald the Wildman, would be taking his place. The brewery paired the message with an image of a tombstone and Ewald's picture hanging around it. To take the joke a step further, the post took on a carefree and purposely oblivious tone to the devastating news it was delivering to followers.

Ewald the Golden, a Bavarian-style Hefeweizen, has come to be a household name in many homes across Minneapolis—and beyond. Its iconic logo of Utepils' head brewer, Eric Harper, wearing a halo over his head, symbolizing the hazy golden hue of the popular beer, is recognizable in stores and restaurants where Utepils is available.

As soon as the post was published, loyal beer fans made their voices heard to Dan Justesen, founder of Utepils, and his team.

"We knew it would get a few people riled up, but we couldn't have predicted what happened next," said Justesen. "Customers started buying all the Ewald beers in liquor stores, we had a huge rush on growler fills, and more people were coming in every day asking for pints of it."

In addition to patrons, Justesen received multiple phone calls from his distributors asking for an explanation on why the beer was being pulled.

"They kept telling me it was their biggest seller and how they couldn't believe we were getting rid of it," continued Justesen.

Though fans were outraged and distributors were at a loss for words, this story did have a happy ending once it was revealed that Ewald the Golden wasn't going anywhere.

"Though the joke didn't go how we planned, it really touched us to see how loyal people are to our beer and how comfortable they feel around us to say, 'Hey, you're making the biggest mistake!'" said Justesen. "We work hard to brew the best European-style beers for our patrons, and we want them to feel comfortable in our taproom and to treat us like family. The reaction we received showed us that we're doing just that."

Ewald The Golden—as well as his brother, Ewald the Wildman, a traditional Hefeweizen-style beer with hop characters—is available at Utepils' Fernweh Taproom. You can also find Ewald the Golden at select liquor stores and restaurants.

Beer fans can find Utepils beer near them, using the brewery's beer finder tool on its website.

Nestled on the banks of Bassett Creek between Harrison and Bryn Mawr neighborhoods of northwestern Minneapolis, Utepils' 18,000 square foot site features an iconic taproom and a full-scale craft brewery unlike any other.