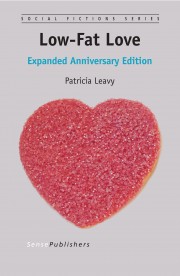 When Low-Fat Love author, Patricia Leavy, Ph.D. was contacted by Adeline Koh, Ph.D., founder of Sabbatical Beauty, Leavy knew it was a perfect match. Low-Fat Love isn’t just any women’s interest novel. A vocal public advocate for arts-based research (a field in which academic researchers use the arts to represent their work to broad audiences), Leavy grounded Low-Fat Love in a decade worth’s of interview research with women about their relationships and identities. This is scholarship that reads like chick-lit. This is a sociological study you can read on a beach or airplane. The novel, now available in a special anniversary edition, has resonated widely with female readers. Leavy attributes this to the authenticity created by basing the novel on research.

No stranger to pushing boundaries Leavy jumped at the chance to form a limited partnership with Sabbatical Beauty when founder Koh selected Low-Fat Love as their spring read, available in the company’s “Breathe” package which also features skincare products inspired by themes in literature. The author and beauty package customers will have a book club meeting via Skype later this spring. It’s the perfect pairing as Low-Fat Love encourages women to stop settling in love and life and know they deserve more, and Sabbatical Beauty products are handcrafted with the intention of supporting relaxation, joy and personal well-being.

Low-Fat Love is a part of the Social Fictions series, the only academic book series that exclusively publishes literary works based on scholarly research. Series creator and editor, Patricia Leavy, Ph.D., an independent sociologist and novelist (formerly associate professor of sociology, chairperson of sociology and criminology, and founding director of gender studies at Stonehill College) started the series because she was frustrated that academic research rarely reaches public audiences.  Believing in the unique power of the arts to engage people and fueled by research in literary neuroscience that suggests reading fiction affects readers more deeply than nonfiction, Leavy partnered with the academic press Sense Publishers. The Social Fictions series has become one of their fastest-growing and most successful book series, garnering numerous awards including a 2014 Special Achievement Award from the American Creativity Association. Leavy’s launch novel, Low-Fat Love remains the most popular title in the series. She recently released the follow-up novel, Blue.