"Non Extinct: A Royal Antigen Mystery" written by author Leigh Pulliam is a gripping novel introducing Leia Martin, whose life was forever changed after having a blood test. Testing positive for a royal antigen once thought to be extinct, Leia becomes suspect of having hidden royal ancestry and becomes trapped in a dangerous spy ring. 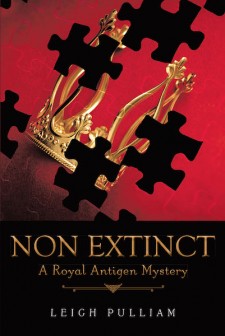 Based on a true story in the 1980’s, a virtually unknown woman, whose name has been changed to Leia Martin, became the first person to test positive of the old royal antigen since the 1950’s and the only person known to test positive for it in the United States of America. From an undisclosed Kentucky medical office, Leia’s blood was sent to the Mayo Clinic and later to Switzerland for testing. Leia herself denied having any kinship to royalty from the very beginning.

It turned out to be a positive royal antigen, thus making Leia related to the bloodlines of England’s Queen Victoria. It’s viewed as extraordinary and mysterious since it has been extinct for many years. Leia becomes suspect of having a hidden royal family ancestry. Thus, Leia becomes trapped in a dangerous spy ring with foreigners.

Readers can purchase “Non Extinct: A Royal Antigen Mystery” at bookstores everywhere, or online at the Apple iTunes Store, Amazon, Kobo or Barnes and Noble.

Angie Galler Bowen's New Book 'Saints Codependent: Good From Evil' is a Riveting Novel of Three Women and Their Struggle to Finding Themselves Amid Heartbreak and Pain
Recent release 'Saints Codependent: Good from Evil' from Covenant Books author Angie Galler Bowen is an emotionally driven story about three women who deal with abuse, near-death, and confusion that test their resolve and conviction in the Christian way.
Covenant Books - Sep 29, 2020

Dan Coffman's New Book 'The Coming' is a Riveting Novel of Two Individuals Who Try to Solve an Alien Mystery That Could Bring About an Extraterrestrial Apocalypse
Recent release 'The Coming' from Covenant Books author Dan Coffman is a page-turning book about a duo who seek to uncover otherworldly artifacts that herald the destruction of Earth through alien intervention.
Covenant Books - Sep 28, 2020
Newswire