Premonition, the World's largest litigation database, just announced the addition of the Netherlands Courts to its innovative and revolutionary analytics product. Premonition is an Artificial Intelligence system that mines Big Data to find out which lawyers win before which Judges. 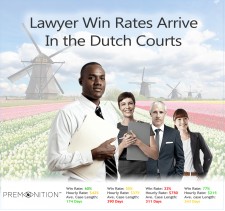 Miami, United States, September 14, 2016 (Newswire.com) - Premonition, the World’s largest litigation database, just announced the addition of the Netherlands Courts to its innovative and revolutionary analytics product. Premonition is an Artificial Intelligence system that mines Big Data to find out which lawyers win before which Judges. According to the company, “It is a very, very unfair advantage in Litigation.” Premonition’s system can identify top performing lawyers by win rate, case type, case duration and, most importantly, Judge.

The company claims, based on their findings, that the right Lawyer/Judge pairing, influences the outcome of a case by 30.7%. “The old saying that ‘A good lawyer knows the law, but a great one knows the Judge,’ is true,” says Toby Unwin, Co-Founder. However, “it goes further than that, as it is not just ‘knowing’ the Judge, but rather having compatible thinking, learning and presentation styles, which makes one’s argument and lawyering style more attractive and effective before certain judges vis-à-vis others.” At the end of the day, this results in more effective representation and outcomes.

The sudden arrival of analytics to law, an industry that traditionally selects Counsel based on law firm brand and peer recognition, is causing a fundamental but important shift in how lawyers are selected. “Law has historically been a credence good. This means the market relies on elite credentials and firm reputation as a proxy for skill,” explains Professor William Henderson, of Indiana University Maurer School of Law.

To analyze the effectiveness of the traditional approach to lawyer selection, Premonition undertook the largest legal study ever conducted in The United Kingdom. It found, due to the opaqueness of the legal market that a law firm’s choice of Barrister was 38% worse than random! It also found that pricing and performance are weakly correlated and a random selection is often more effective than selection based merely on reputation, law firm status or hourly rate.

While some may view legal analytics to be controversial, Corporate General Counsel see value in Premonition's ability to select lawyers based on actual performance. “Performance transparency is very important, but with this tool, we can now go even further”, says Nissan Canada General Counsel and Premonition Board Member, Fernando Garcia.

“For the first time ever, companies can now make true color, ethnicity, sexual preference and gender-blind hiring decisions. Women and minorities are under-represented in small to medium sized law firms that have traditionally been ignored by major corporations, yet they are as successful, if not more so, in litigation. The era of guesswork is over. Hiring by metrics has arrived. Our process for selecting external counsel will change.” Selecting diverse lawyers makes good business sense.

Premonition is one of the fastest growing companies in law, though its ambitions stretch far beyond the industry. "We are a 'Perception/Reality Arbitrage' firm," states Premonition's inventor, Toby Unwin.  “We had a law student ask us to add the Dutch Courts. Theoretically, our artificial intelligence system could learn any court in any language in any alphabet. We thought it would be a good test. I’m glad to see it was successful.”

The company has expressed an interest in launching Premonition Netherlands and is interested in hearing from potential local partners. Australia, Ireland and India are targets for further expansion.