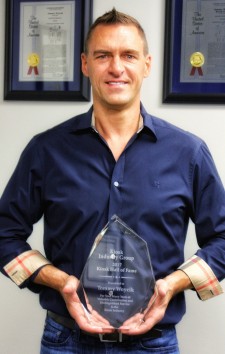 The leading vote getter for the 2017 edition is Tommy Woycik, Founder and President of NEXTEP SYSTEMS, which specializes in self-order for QSRs, Restaurants and Fast Casual and counts SUBWAY, Wow Bao, and Which Wich among its clients. NEXTEP self-order includes indoor, outdoor, drive-thru, and mobile solutions.

“In much the same way that mobile ordering began with pizza and spread throughout restaurants of every category, self-order has started with QSR and fast casual pilots, but will soon become standard industry-wide, both inside and at the drive-thru.”

“Consumers will come to expect a consistently elevated experience, regardless of location or brand. As standardization builds momentum, we’re looking forward to the opportunity to help restaurants weave self-order technology into their business models and brands.”

The Kiosk Industry Association and Advisory Board congratulate all the inductees and thank them for their dedication to the kiosk industry over the many years.  Their success is our success.

The Association thanks KioWare for sponsoring the Hall of Fame for 2017. Thank you.  The complete Kiosk Hall of Fame list is located here.

The Kiosk Industry Association is a professional news and marketing association for  kiosk and self-service manufacturers. It is for the benefit of kiosk manufacturers, component vendors, service vendors, developers, resources and client companies who are involved in self-service and kiosk systems. News about the industry and by the industry is published on our website when it is relevant to companies that deploy or may deploy self-service, or illuminating companies that support those deployers with hardware, software or applications. It is part of the Kiosk Industry Group which was begun in 1995. Visit https://kioskindustry.org for more information.

We are companies from all over the world who provide kiosk and self-service technology, hardware & software, to enable unattended access for customers & employees. Making self-service easier, faster, safer, more reliable and more profitable for all.