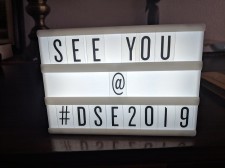 The Kiosk Manufacturer Association is happy to announce that several of its sponsors will be exhibiting next week at DSE 2019. 191 companies in total will be represented. What began as a digital signage tradeshow seems to be evolving to a large format interactive informational kiosk tradeshow. Sponsors exhibiting include Peerless-AV, 22Miles, Optconnect, Zivelo, MimoMonitors and LG-MRI.

Craig Keefner of KMA notes, "Touch is still the key for establishing ROI and digital signage is evolving to interactive. Device interaction currently is mobile phones but that will widen as well in scope."

KMA has a preview article with links and next week pictures and comments from the exhibiting sponsors will be added. KMA would like to thank Peerless-AV for the mini lighted display signage they sent US Mail prior to the show. And thanks to LG-MRI.

So what do Walmart, Amazon, Schwarz Group, Carrefour, Costco and Aldi have in common? They attended NRF 2019 and are some of the Top 10 Global Retailers in the world. Companies such as YUM Foods, Tommy Hilfiger, Whole Foods, Apple, T-Mobile and the New York Mets are companies that attended NRF and met with KMA at our booth. KMA has formed a retail advisory group to help solicit opinions and thoughts on Accessibility and ADA which KMA can use with the entire ADA & Accessibility committee and later the U.S. Access Board during their meeting later this year. KMA will exhibit again next year at NRF 2020. If you are a retailer or deployer and are willing to be surveyed from time to time please contact craig@kma.global and there is no charge for participating. The current group comprises 40 participants.

KMA is committed to public outreach via all mechanisms including tradeshows such as NRF. KMA is a member of NRF.

In Other New - Features

We are companies from all over the world who provide kiosk and self-service technology, hardware & software, to enable unattended access for customers & employees. Making self-service easier, faster, safer, more reliable and more profitable for all.